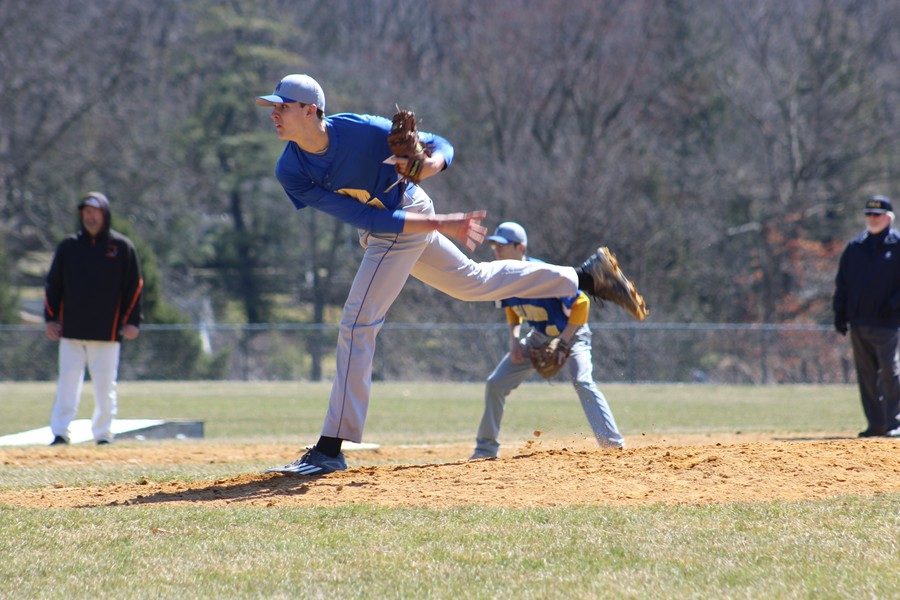 The Belllwood-Antis Lady Blue Devils softball team looked like they had it in the bag, a win against 11-2 Claysburg-Kimmel, but it was not to be. The Lady Bulldogs fought back from a 0-4 deficit to defeat B-A 7-6 in Claysburg last night.

Even with the loss, there is a bright side for B-A’s softball team. The Lady Blue Devils scored six runs and came within a point of knocking off a Claysburg-Kimmel team with only two losses.

Luensmann tosses one-hitter
Travis Luensmann took a no hit bid one-out into the fifth inning and finished with a one-hit shutout in the Devils’ 10-0 win in six innings yesterday at Claysburg-Kimmel.

Luensmann fanned 10 and walked none in a performance Coach Steve Conlon said was his best of the season.

“This was the best he has thrown,” Conlon said. “He was in the zone from the start. He was aggressive getting ahead, he didn’t waste any pitches, and he went after the hitters.”

The Blue Devils improved to 11-2 overall and 9-2 in the ICC with their fourth straight win and third shutout. Claysburg-Kimmel fell to 3-6 and 3-5.

Junior Trentin Whaley went 2-for-4 with a double and 3 RBI to lead an offensive attack that produced 11 hits.

The Devils jumped on Bulldog starter Hayden Ickes early, giving Luensmann all the run support he would need in their first at-bat. Jack Showalter delivered an RBI single in his first plate appearance in the top of the first, and Troy Walker plated a pair with a double one batter later to make it 3-0.

Whaley came through in the top of the fifth with a 2 RBI double, and Mark Stewart brought home another with a single to center to increase the lead to 7-0. Whaley then stayed hot in the sixth with an RBI single to make it 8-0. Noah Plank drew a walk to drive in a run and Alex Schmoke’s RBI single to left put the 10-run rule in effect.

Luensmann, meanwhile, struck out eight through the first four innings before Canaan Burket singled in the fifth to break up the no-hit bid, but he regrouped to retire the next two batters he faced, one by way of strike out.

In the sixth, Luensmann fanned Kegan Feather to start the frame and then induced a pair of pop ups to end the game.

Conlon said it was good for his team to have the middle of its order produce the way it did against Claysburg. Luensmann, Showalter, Walker and Whaley combined to go 8-for-14 with six RBI.

“The middle had a good day from Travis, Jack and Troy, and it was also good to get Trentin Whaley hot again,” he said.