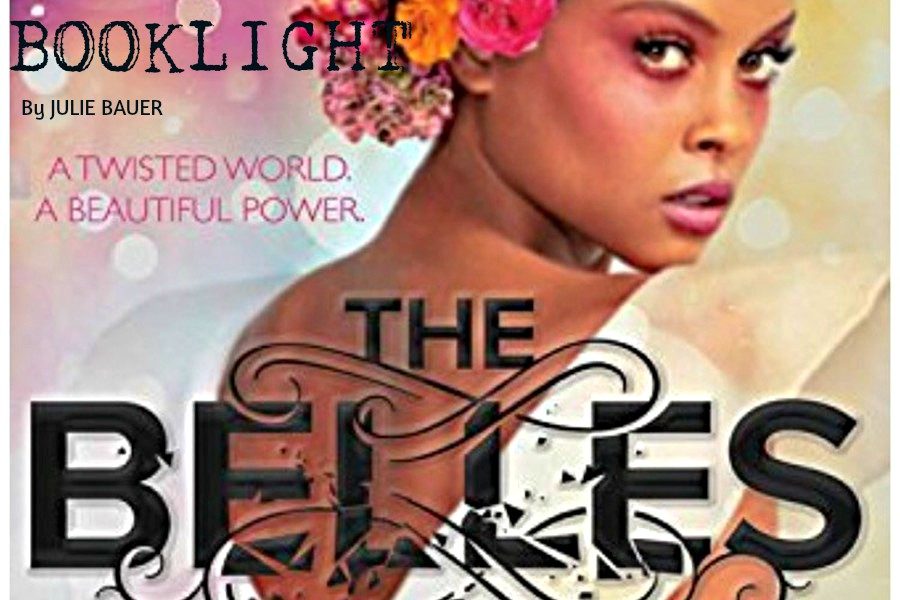 This week Julie Bauer rates the novel The Belles.

Dhonielle Clayton’s The Belles presents a gilded society that explores our obsession with beauty.

Camellia Beauregard is a Belle. The people of Orléans are born all the same: gray skin, red eyes, and yellow, straw-like hair. Only with the help of a Belle and her magic can the people transform and become beautiful.

Camellia and her four Belle sisters vie to be named the Queen’s favorite. The favorite is the most powerful Belle in the kingdom. She lives in the royal palace and is directly responsible for the royal family’s beauty work. However, as time goes on, Camellia realizes the gritty, sinister truth of everything she has been taught to value. She learns that Belles are far more powerful than she originally thought. Camellia is faced with a decision– should she use these powers for the better of the kingdom, or stay in place as she’s always been taught?

Clayton’s imaginative world-building and lush descriptions set The Belles apart from other young adult fantasies. With colorful descriptions and elegant prose, Clayton takes the time to make the world of Orléans feel real.

Still, at times, it gets to be too much. Clayton stops to smell the roses so often that it detracts from the flow of the narrative.

Another great aspect of Clayton’s world-building lies in its magic. The magic used by the Belles is known as “the arcana.” It is used to change a person’s personality, give them a certain talent, or most importantly, change their appearance. The Belles can change any aspect of a person’s appearance, from making their waist smaller to changing the color, texture, and length of their hair. The people in this society are so obsessed with beauty that they are willing to undergo these painful treatments for huge sums of money.

““Nonsense,” Lady Jocquard says. “Her looks have been a mess lately. Can’t you see her eyes and nose? They’ve always been a problem. Her natural template is flawed.”

Camellia shines brightest in the moments like the one above where she realizes that some imperfections are beautiful in their own right. Clayton does not develop this idea much, which is a great loss of potential.

This novel’s characters are not its strongest point. Camellia is a refreshing protagonist– she’s a woman of color who is stubborn, competitive, and ambitious, while many young adult heroines would rather stay low-profile. However, she’s the only one out of her Belle sisters that gets any development. The others are whisked away early in the novel and will likely be revisited in the second book. The Belles could have benefitted by supplementing Camellia’s point of view with the occasional chapter from the points of view of her sisters, who are stationed around the world.

The other “good guys” in the story feel barely worth mentioning. There is a love interest. He pops in and out of the protagonist’s life, so the chemistry between the two characters has little chance to develop before they’re making out at the end of the book.

The main villain of the story is Princess Sophia. Sophia is a greedy megalomaniac who wishes for Camellia to make her the most beautiful woman in the country. At first, Clayton inspires pity in the reader– Sophia’s obsession with perfection is just a product of the society of The Belles. Pity quickly turns to revulsion as Sophia shows more and more of her cruelty. By the end of the novel, it is hard to understand Sophia’s motive or parse out a reason for why she is the way she is.

Finally, there are three queer female characters in the novel. All three are inconsequential side characters, and two of them are in a secret relationship with each other. In a shocking plot twist, one of the girls dies horrifically while the other watches. Also, the third queer girl dies.

This is known as the “Bury Your Gays” trope which is common in today’s books and television. LGB characters are just not allowed happy endings. In this case, there was a pointless death of a queer woman to shock the reader and spur the plot on.

Clayton is a huge advocate for diversity in books, so it’s a mystery as to why she did not see an issue with this decision. She could have created the same effect or lead the plot in the direction she wanted to take it in literally any other way.

Despite this blemish, The Belles has some important messages. How far would we go to look perfect? In Clayton’s beautifully crafted society, beauty is a precious commodity that is capitalized on as much as the market will bear, and the Belles are exploited for what they can do. It’s a common notion that the only way to love yourself is to have your looks constantly attended to by a Belle. Looking flawless is an obsession, almost a requirement. Sometimes, The Belles hits too close to home.

Although not without its flaws, The Belles opens up an important discussion on the standards we hold women and girls up to in terms of their appearances. Dhonielle Clayton truly creates the perfect level of suspense surrounding this complex, beauty-obsessed world.