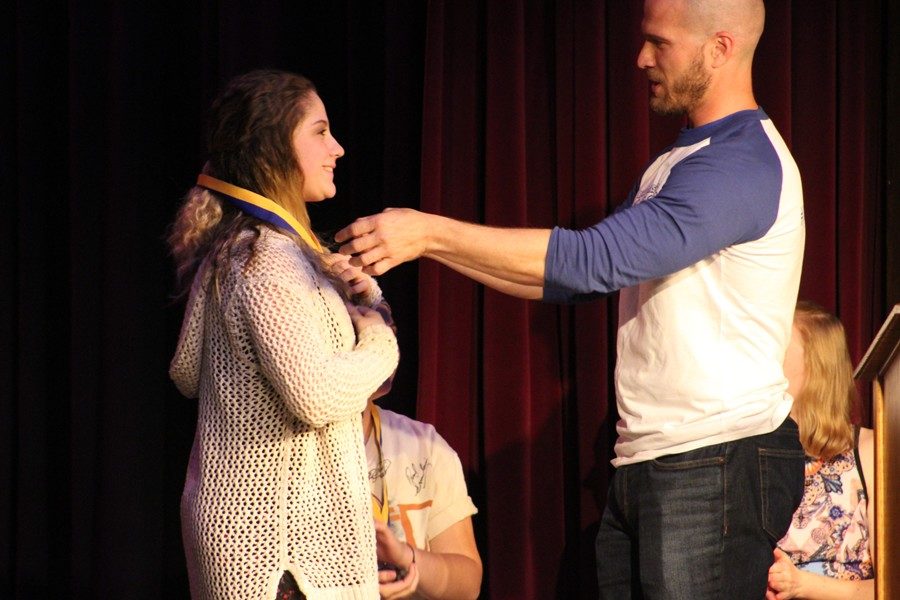 The Bellwood-Antis High School Poetry Slam underwent a youth movement Friday, with four of the five awards given to students among the freshman class.

Freshman Isabella Barbosa was named the over all winner, classmates Malia Danish and Nicholas Caracciolo won in the duo category, and ninth grader Hunter Gregg was named best new slammer.

Nic and Malia  had low expectations for their performance and were pleasantly surprised by the crowd response to their performance, which was called “Rage Quit,” referring to kids who lose their mind over video game mishaps.

Malia said simply, “I didn’t think we would win.”

“I thought it was good and the audience seemed to like it,” said Nic, “so I guess we did good.”

Mr. Naylor, freshman English teacher and poetry slam organizer, was happy to see the pair get up on the stage.

“Nic and Malia were funny. I’m glad Nic was able to talk Malia into joining the slam and I hope they continue for years to come,” said Naylor.

Mr. Naylor also expressed how proud he was of another student performer, Isabella Barbosa, and her thought provoking poem about the passing of her mother.

“Isabella wrote a very special poem,” said Mr. Naylor. “I’ve seen her deliver it twice now and there’s usually not a dry eye in the room.”

Few people could have performed an emotional piece such as Isabella’s, but it was the audience that really put the pressure on the young poet.

“It was stressful being in front of the whole school,” said Isabella. “The seniors were up front and were looking right at you, almost like they were judging you.”

Tylar set the tone for the event by going first and reading an ironic poem about her disdain for poetry.

Overall, one could say the poetry slam was a huge success, and the man behind it all agreed.

“I was very proud of our kids this year,” said Mr. Naylor. “I know the freshmen kind of stole the headlines, and they were amazing, but our seniors definitely set the tone. Our seniors showed what slam poetry truly is about and they represented themselves and BA with class.”