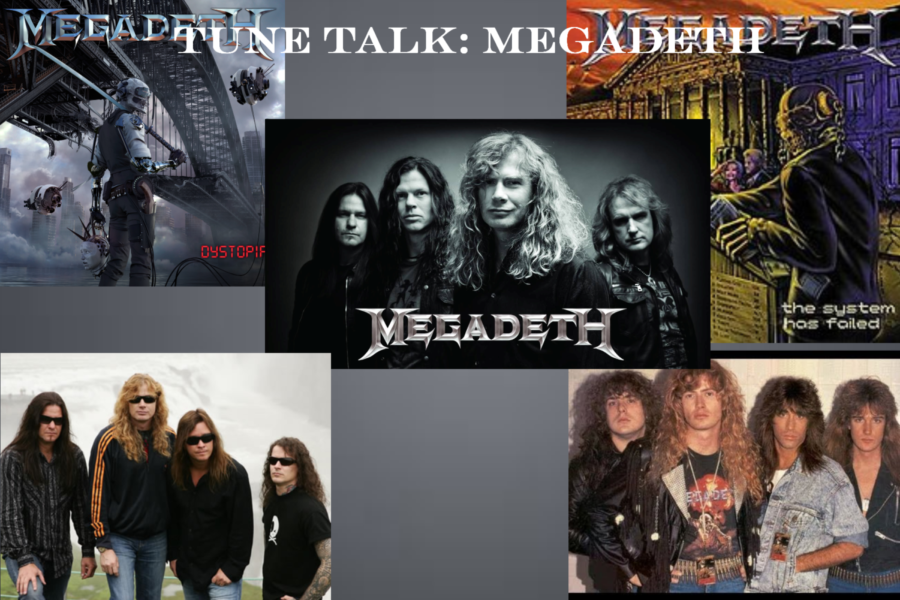 My second favorite metal band of all time, but yet was the biggest rival of my all-favorite band, Metallica. These guys have been around since 1983, and yes, they still are together today and actually just toured last year for their newest album, “Dystopia,” and I actually saw them on that tour in Pittsburgh.

So let me fill you in on the whole Dave vs. Metallica fit thing first before we start talking about MegaDeth’s albums. So Metallica formed in 1981 with James Hetfield on rhythm guitar and lead vocals, Lars Ulrich on drums, Cliff Burton on bass, and Dave Mustaine on the lead guitar. They were working on their first album of course then whenever the band first started and they all contributed to the album work, everybody was helping out with the songs and everything, and everybody wrote their own part. It came to everybody in the bands eyes, except for Dave of course, that Dave was having a drinking problem that caused him to be overly abusive. According to Dave, one day in 1983, Cliff, James, and Lars stood over Dave at his bedside and just straight up said “You know what, you’re out,” and Dave claimed to ask, “What? No Second Chance?” and the guys said “No, Now go.” I honestly don’t believe that that story for a second seeing as how he claimed they just sat at his bedside, just waiting for him to wake up. James even had a whole other story where they simply just had a conversation together as a band and they decided to fire Mustaine over his alcoholism and abusive issues. But the one thing that was true that both guys said was that Metallica’s newest guitarist was actually waiting in the same area as the band, Kirk Hammett, in which he heard the entire conversation.

So skipping ahead from the awkwardness of Mustaine’s former position in Metallica, first we got their “unknown album,” and by unknown I just mean that it was pretty much a really unsuccessful album. “Killing is my Business…And Business is Good!” was released in 1985 and didn’t get much success for the band. I didn’t mind the album personally, not my favorite, but I thought it was pretty decent. You got some of MegaDeth’s original songs like “Rattlehead,” “Mechanix,” “Chosen Ones,” “The Skull Beneath the Skin” has to be my favorite out of them all.

MegaDeth’s second album is their biggest ever and most known in the history of their albums, “Peace Sells…But Who’s Buyin’?” was released in 1986 and as all famous metal and rock musicians said was how great this album was, and of course the song, “Peace Sells” was everybody’s favorite MegaDeth. Of course this song has plenty of other great songs that I enjoyed which are songs like, “My Last Words,” “Bad Omen,” “The Conjuring,” “Wake Up Dead,” and “I Ain’t Superstitious.” This was also about the time that Dave Mustaine was beginning to get big headed about his success, trying so hard to be better than Metallica but he simply can’t and just will never be better than anything Metallica came out with, besides Metallica’s disappointment albums like “Reload,” but then again, MegaDeth came out with “Risk” which was a huge disappointment as well as a downfall for MegaDeth.

I’m going to skip to MegaDeth’s best work, so we’re going to skip ahead to the wonderful year of 1990, and only because we’re getting to my second favorite MegaDeth album, “Rust in Peace.” On this album we got even more hits from MegaDeth including “Holy Wars…The Punishment Due,” “Lucretia,” “Tornado of Souls,” “Rust in Peace…Polaris,” and my absolute favorite, “Hangar 18.” This album was actually my dad’s favorite and he played it all the time whenever I was a child but not as much as another album I’ll mention later, but that’s the main reason I love the album, I’ve grown up with that music.

I actually can just go down the line for now, in 1992 came yet another one of MegaDeth’s best work which was “Countdown to Extinction.” This is my third favorite album, it featured even more metal hits like “Skin o’ My Teeth,” “Sweating Bullets,” “Countdown to Extinction,” “Architecture of Aggression,” and everybody who loves MegaDeth loves their biggest hit “Symphony of Destruction.” This is once again an album I grew up with all my childhood, (Don’t ask why I grew up with metal music), but I loved all of my dad’s music whenever I was younger. Now he’s into Christian rap and I honestly can’t stand rap music anymore souly because all the kids here in school think they’re all cool and what not since they listen to rap and blast their music.

And now for a small paragraph of disappointment. “Risk.” It was released in 1999 and all people, including non-MegaDeth fans, hated this album. This album is honestly so poor that it doesn’t even have any good hits. This album was about the same level as Metallica’s “Reload,” only because both of these albums were the point in time whenever the metal band decided to go slightly soft, very disappointing for all MegaDeth fans.

Skipping ahead to my all-time favorite MegaDeth album ever, no other album will ever top it for me is, “The System Has Failed.” Oh my gosh was this album amazing and it even came out in 2004, the same year my favorite My Chemical Romance album, “Three Cheers for Sweet Revenge,” was released. Now I don’t have a single song on their album that I’m disappointed with. “Die Dead Enough,” “Tears in a Vial,” “Kick the Chair,” “Blackmail the Universe,” “Back in the Day,” “Of Mice and Men,” “Truth Be Told,” that’s only about half the album and I love the entire thing, but if I had to choose a number one favorite I would happily pick “The Scorpion.” This is simply a masterpiece with the style they went with, it just got heavier and I felt like there were more guitar solos in this album than any other.

MegaDeth continued to climb up the charts ever since and honestly, I’ll let you, if you’re interested, listen to their other albums for yourself and I will skip ahead to their latest album which is also very good, “Dystopia.” I don’t mean to brag, but these guys are awesome live and I know this because I saw them in July in 2017 at stage AE in Pittsburgh and it was a great experience. But anyways, focusing on the album, there are some more of my favorite songs like “The Threat is Real,” “Post American World,” “Fatal Illusion,” “Lying in the State,” “Bullet to the Brain,” and the greatest of them all, “Dystopia.”
I understand if you don’t really care about heavy metal but if you’re willing to give it a try I would definitely give these guys a chance of your attention.