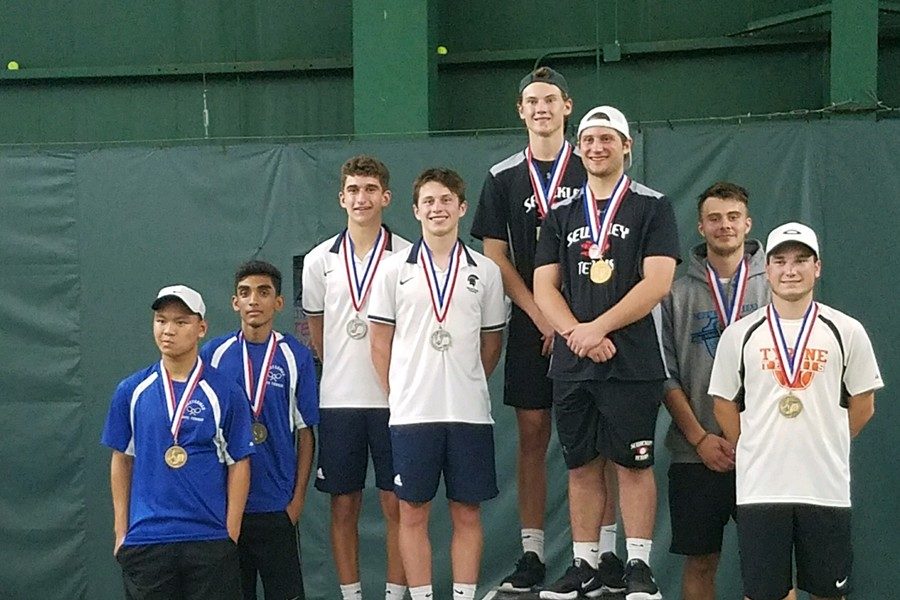 Paul Lemaire and his teammate Ethan Vipond recieve their third place metal at the PIAA 2A State Tennis Tournament.

When B-A foreign exchange student Paul Lemaire came to the US in September, he didn’t even know it was possible to place at states, but flash-forward nine months and the senior found himself in the bronze metal match in Hershey.

“I didn’t know we had states or district tournaments (when I came over to the states), but after seeing the competition there I’m proud of the way my teammate and I played,” Lemaire explained.

Lemaire was a member of the  bronze medal doubles tennis team at the PIAA Class AA championships last weekend.

Lemaire, playing on B-A’s co-op team with Tyrone, won the District 6 championship in boys doubles with his teammate, Tyrone student Ethan Vipond. The pair  just met at the start of the season and  only started playing together a couple weeks after.

Lemaire and Vipond went undefeated during the regular season and continued that form into the district playoffs, where they beat the defending champions from Richland. With that win penciling the pair into the PIAA state tournament in Hershey, Lemaire was proud, but knew they had a lot of work to do.

“We had to practice for a week longer after the regular season to get ready for states. We knew there would be good teams there,” Lemaire said.

The extra practice paid off with Lemaire and Vipond beating the District I seed handily, beating Lower Moreland in two sets, 6-1 in each. After advancing to the next round, the Golden Eagles faced Trinity. The Tyrone pair lost the first set but 4-6 but rallied to win the next two and earn a berth in the final four.

In the semis Lemaire and Vipond dropped their match to District 7 champions Will Nocito and Dylan Parda of Sewickley Academy, who went on to win the championship. That dropped their pair into the bronze medal game.

There, they dropped their first set to Masterman’s Anthony Chaiditya and Kailash Natarajan 3-6 before taking the next two sets 7-6 (5) and 6-2.

Lemaire, who said he plays year-round in his native France, was thankful to all involved for the opportunity to compete for a title.

“I’d like to thank my coaches and my teammates, and Ethan, because he played really well this weekend,” he said.