Blue Devils fall in the Brawl 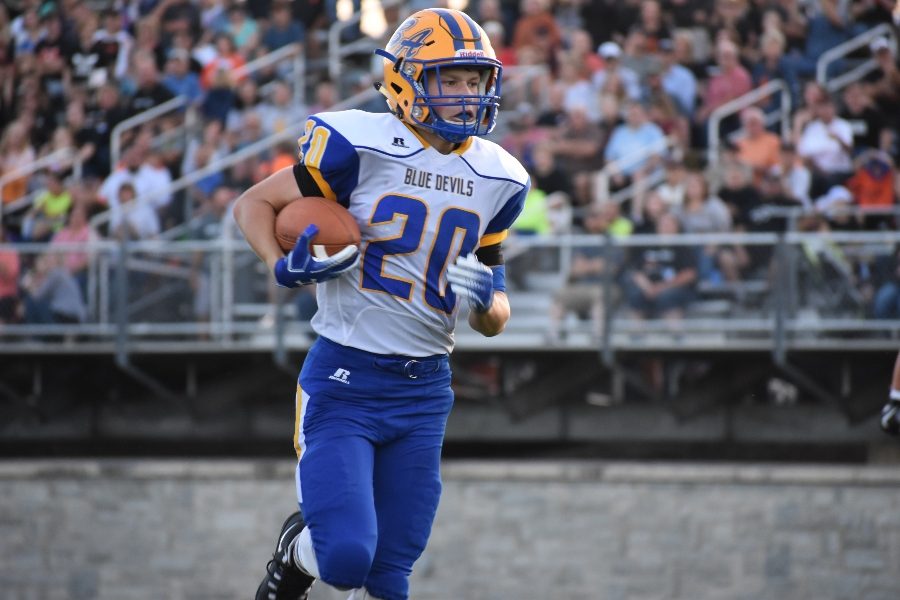 Zach Mallon reverses field on a touchdown that was called back in the Backyard Brawl.

It probably wasn’t the way Nick Lovrich envisioned game number one in his career as the head coach of the Blue Devil football team beginning – nobody wants to lose to their arch-rival, whether it’s game one or 100 – but he saw a lot to like in B-A’s 16-7 loss to Tyrone in the Backyard Brawl on Friday.

The Blue Devils played a gritty game that was never decided until a couple big plays got the ball rolling for Tyrone in the fourth quarter at Gray-Veterans Memorial Field.

Until then, it was a 7-7 slugfest, and B-A was driving for a go-ahead score.

“I was proud our kids never gave up. Right to the end, they were playing as hard as they can,” Coach Lovrich said. “That’s a sign of a team that’s going to be able to overcome some adversity, and that’s what we’re hoping for.”

With under 10 minutes to play, B-A had driven from its own 25 to the Tyrone 24 looking to regain the lead it had established in the second quarter. But on second down Tyrone’s Cory Lehman got free off the edge and sacked Blue Devil quarterback Shawn Wolfe, causing a fumble. Braeden Nevling-Ray recovered it at the B-A 35.

From there, it took the Golden Eagles just two plays to take their first lead against the Devils since overtime in the last year’s Brawl. First, Denver Light hooked up with Brandon Homan for a 47-yard play to the 18, and then Light fond Damon Gripp open in the corner of the end zone just out of the reach of Zach Mallon for a score with 9:11 remaining to make it 13-7 Tyrone.

“On a lot of those passes we were right there. We just need to finish the play,” said Coach Lovrich. “That’s part of it. You have to play the entire play. We start off, and we’re in pretty good coverage, and then just a little break down, in a passing situation, two feet makes a big difference. We’re close. Instead of them making the play, we were close to where we could have been making the play.”

Tyrone put the game out of reach with 1:47 to play when Keagan Raabe nailed a 20-yard field goal.

Bellwood-Antis had taken the lead in the second quarter using some big plays of its own. Wolfe started off by throwing the deep ball to Andrew Hale, and the 42-yard pitch and catch set up B-A at Tyrone’s 38. A personal foul penalty, followed by a 19-yard run by Troy Walker, got theball to the 3, and from there Nick Plank went in untouched. Alex Schmoke kicked the PAT to put the Devils ahead 7-0 with under five minutes left in the half.

Tyrone focused most of its defensive attention on Wolfe, refusing to allow the senior to get outside of its containment. Wolfe completed just 4 of 10 passes for 53 yards and was sacked four times.

“He still got around us a couple of times and made some plays early on, especially in their option,” Tyrone coach Jason Wilson said. “We kind of prepared for it a little bit this year, whereas last year we didn’t know what to expect. He broke a couple (last year), and we weren’t really good at tackling at that point. We’ve worked a lot more and switched up some tackling drills, just to work on things like that. We knew going into it that our object was to contain the quarterback, and if you wanted to win this game you were going to have to.”

Tyrone responded by going 73 yards in eight plays to tie the game on a 7-yard run by Zac Albright.

The Blue Devils will have the week to regroup before facing Glendale next Friday at Memorial Stadium in their home opener.

“We took some positive steps,” Coach Lovrich said. “Defensively, at points, I think we played pretty well, and offensively, at points, we played well. We’re going to have to get more consistent. I told the guys we win as a team, and we lose as a team. We have to bring each other up and assess ourselves. Did we hit all of our goals? Did we do all of those things we talked about during the week? That’s a part of it. We have top find out what we’re going to be good at.”