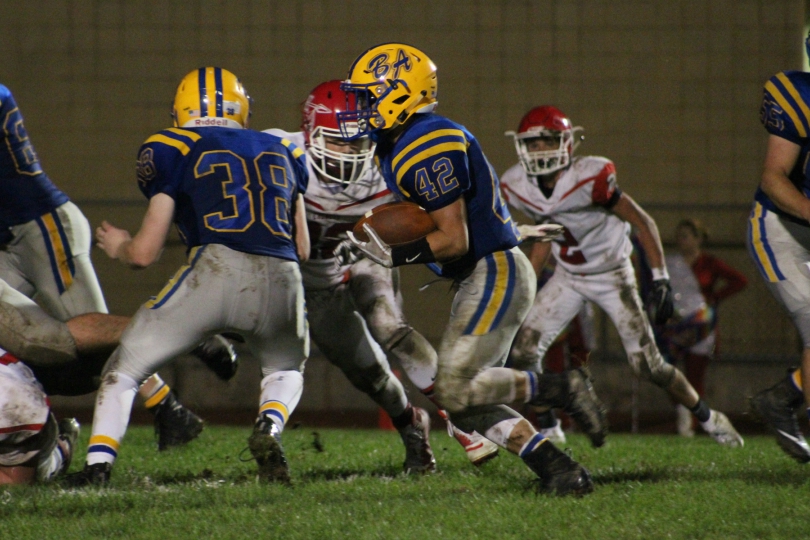 Alex Frederick had his second straight 100-yard game against Everett.

The Blue Devils earned another win Friday night as they faced Everett, even though BA gave up 3 touchdowns within the first half, but left Warriors far from a touchdown in the second half.

The Blue Devils survived a scared against Everett, a game where they were down 13-3, but Alex Frederick stepped up for the second week in a row with another 100-yard game to lead Bellwood-Antis to a 31-19 victory at Memorial Stadium.

Although the Devils had a rough defensive start during the first half of the game, they came out to play after Coach Nick Lovrich made some adjustments during halftime.

Overall B-A dominated the run game against Everett, with the Devils gaining 270 yards and Everett only 27.

“It is a mindset. Our guys are very confident right now. You have to have confidence in your guys,” said Coach Lovrich.

Frederick has been dominating Bellwood’s run game, and on Friday he helped the Devils out with putting 3 TDs on the board, bringing B-A back from a 13-3 deficit in the second quarter. He scored twice in a row over a span of less than two minutes to make it 17-13.

After the Warriors scored again on a touchdown by Brandon Mills off the pass of Macen Akers, Frederick scored once more with 17 seconds left before halftime to make it 24-19 at halftime.

“Our run game is so strong, starting with the line, and that’s where we succeed. It’s really important,” said Frederick.

B-A is having a great season, ending Week 4 with a 3-1 record, overall, while staying unbeaten in the ICC at 3-0. The Devils will face Moshannon Valley on the road this Friday.