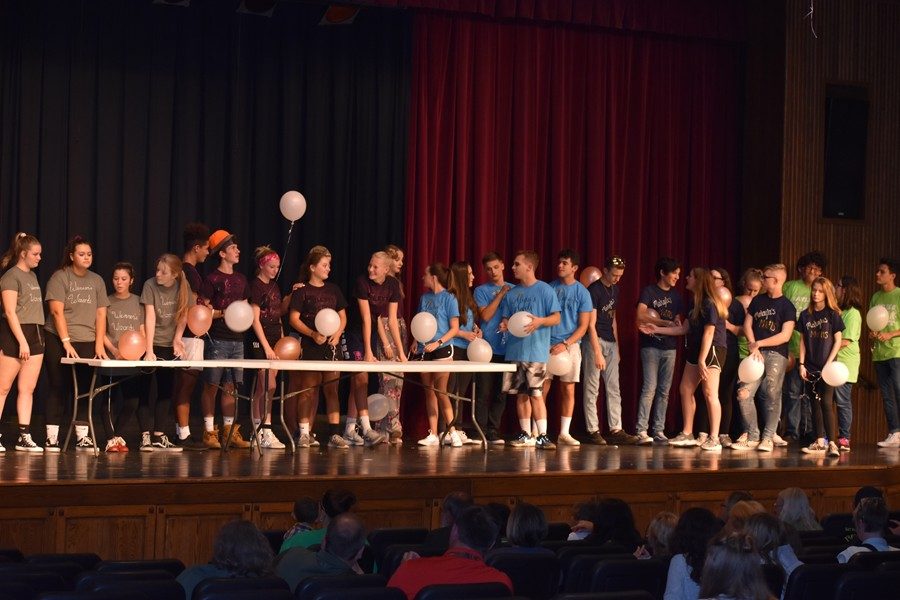 One of the most anticipated homecoming activities every year is skit night.

Skit night is the time for the ladies of the court to really show off their personalities in a scene for a majority of the student body to watch. It’s a much loved tradition, but this year the Renaissance Club has decided to switch things up a little.

Advisors, Mrs. Allison Stinson and Ms. Carrie Clippard, came up with the idea to turn the night in to a lip sync battle followed by games. Each girl and her team had the opportunity to choose a song/mashup and choreograph a fun and fresh routine.

The change seemed so simple, but according to senior, Mya Decker, it was a lot harder than they made it seem. Changing routine is tough in any situation, but changing tradition is especially difficult.

“I’ve been doing this for three years, so it was pretty difficult for me to switch things up,” says Decker, “but I think it went over really well for all of us. I’m glad tradition was broken.”

It all went down on Wednesday night.

First up was Alivia Jacobs and her Angels, performing Girls Just Wanna Have Fun. Every member of her group (even the guys) was in full glam makeup with long floral skirts on. Alivia was the center of it all, lip syncing her heart out on that stage. Her crew was in the back steppin’ and clappin’, steppin’ and snappin’. It ended with senior, Chris Friedenberger, stealing the show and outshining everyone. It was wild.

Next was Makayla Pluebell and her Mains with a lip sync battle within a lip sync battle. The whole thing was boys versus girls. Sophomore, Hunter Gregg, was dancing hard and totally dominating the competition. The crowd was wooed and wigs flew (literally).

Kaylee Kasper was up next. Her and her Kourt were rocking out up on the stage. Decked out in some really cool attire (Kaylee had some rad tattoo sleeves) and playing Rock Band instruments, they made the crowd go absolutely wild. I was personally amazed by Kaylee’s superior lip syncing talents.

Riley’s Rednecks were ready to make the crowd fall in love with them with their mashup of some of the most popular country songs. They had a plethora of props and dancing ability. It was especially fantastic because there was a dog! A DOG! The rednecks did amazing.

Last, but not least, was Paige Wenner and her Wizards. Their theme was the Wizard of Oz! They too had a dog, and it was possibly the cutest thing anyone in that crowd has ever seen. Senior, Jordyn Beam, is a true dancing queen and choreographed that whole entire thing. She really went off and did the most. It was so beautiful.

The battle was followed by a series of Minute to Win It games and a relay. All teams had a great time and really tried their best.

Good luck to the court! Have an amazing night at the game!