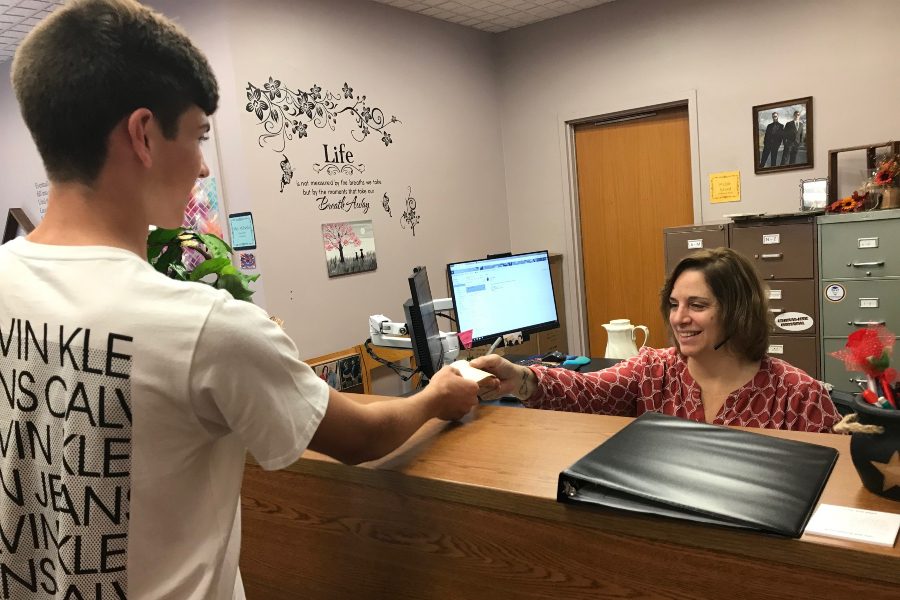 Corey Johnston hands in an excuse slip to Mrs. Beth Zitterbart in the attendance office.

With approximately 400 adolescents in the high school, the chances of a large number of them being chronically absent is higher than you think.  Senior, Paige Wenner, can attest to this.

Paige estimates that she misses about five or six, if you include the days she comes in late. This would be considered by definition chronically absent.

“What many people, especially school staff, don’t understand is that it’s not about not caring about education, it’s about medical issues,” she commented.

Paige suffers from insomnia, but she’s not the only one. A large number of students suffer from different illnesses varying from sleeping problems or anxiety issues. This impacts them greatly and can affect their school lives.

With 180 days in a school year, it is extremely difficult for students to not miss a single day. One or two absences a marking period usually doesn’t present any problems, as long as students are making up necessary work on time.

However, when this number goes up and up and the absences become more frequent, administrators can become concerned. In Pennsylvania, a high rate of absence for a school can contribute to a loss in state subsidies, including Basic Education Funding.

Chronic absenteeism can be defined as missing 10 percent or more of a school year, approximately 18 days a year. Although to many students this seems like a small number, there is a large school population that can be classified as chronically absent. Nationwide the figure ranges from 5 to 7.5 million.

The Bellwood Antis School District has always valued its high attendance numbers, as well as its academic performance. According to high school principal Mr. Richard Schreier, the overall district and high school attendance is above the state requirement of 90% or above.

“Attendance and truancy are ongoing problems in some other areas of the state,” he commented. He also mentioned the laws and policies that schools have to follow such as the School Attendance Improvement Plan, but he also wants make sure B-A focuses on programs to make it a positive place where the students want to be. With activities such as the Renaissance club, Citizen Of The Year (COTY), and the Challenge Program, students can be awarded and acknowledged for achievements other than just academics.

Students can miss school for a number of reasons, but most commonly, they miss for illness or medical appointments. With a parent note, the school considers these excused absences.

When a student begins to miss for personal reasons such as anxiety, disdain of school, or abnormal sleeping patterns, the administration wants to get that student comfortable and back in school so they can continue to further their education, said guidance counselor Mrs. Danielle McNelis.

“It’s a team effort, though, so it certainly requires the student to make the commitment to come to school as well,” Mrs. McNelis said.

Ideally, Mrs. McNelis said, the school would love to have zero absences and perfect attendance for all students but this goal is just not realistic.

“In the end, for effective education and success in college and career readiness, students need to be in school to learn and reap the benefits of a Bellwood-Antis education,” said Mr. Schreier.