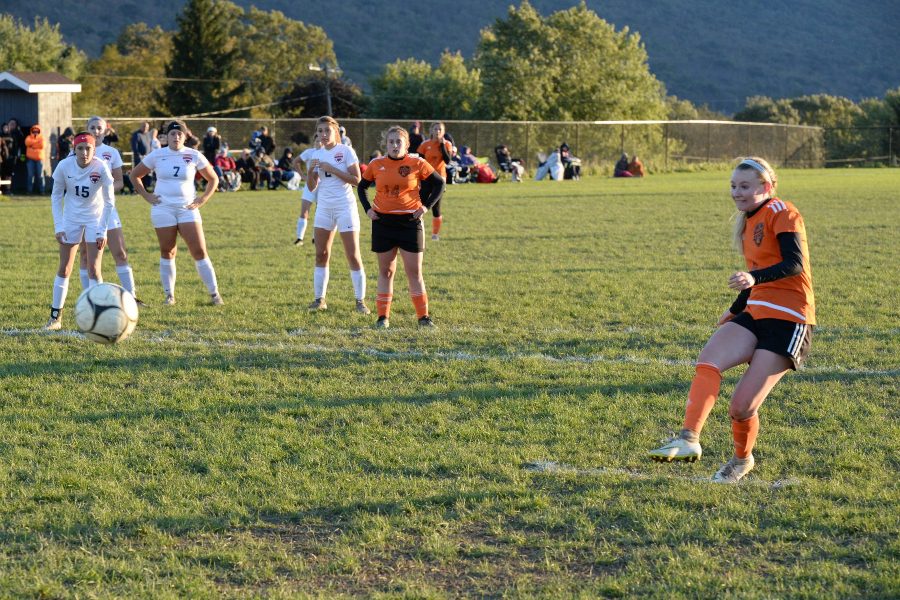 Riley D'Angelo eyes up the ball after letting loose a penalty kick yesterday against Huntingdon. D'Angelo made the kick to break the program's career goals scoring record.

It’s been a tough ride for Riley D’Angelo since her freshman soccer season, but days like yesterday soften the pain of three straight losing seasons.

The previous record holder was Carrie Vance with 75 goals set in 2014.

But on Wednesday, with 55 seconds left in the game against Huntington, Riley took a penalty kick and scored.

Though the team took a loss 3-1, Riley’s goal was one to remember. With 76 goals scored in her career, Riley is relieved about her accomplishment.

“I’ve been working on it since freshman year, so I’m glad I got it. It was the best way to go out,” said Riley.

Coach Mike Sparacino was hoping was anxious for Riley to hit the mark.

“The girls were really pushing for it. It was fun to be a part of it,” said  Sparacino. “I was nervous all day today, too because I wanted it for her. For me, it’s whatever, but for a player of her caliber to reach that goal was very exciting.”

Riley said she appreciates everyone on her team and the coaches for supporting her.

Tyrone’s soccer team was one of the best in the Mountain League when Riley was a freshman in 2015, a time when they also had B–A grad Marissa Panasiti, who is the program’s single-season goals leader. Since then, the Lady Eagles haven’t finished above .500, and this season they closed out the season yesterday with a record of 3-12-2.