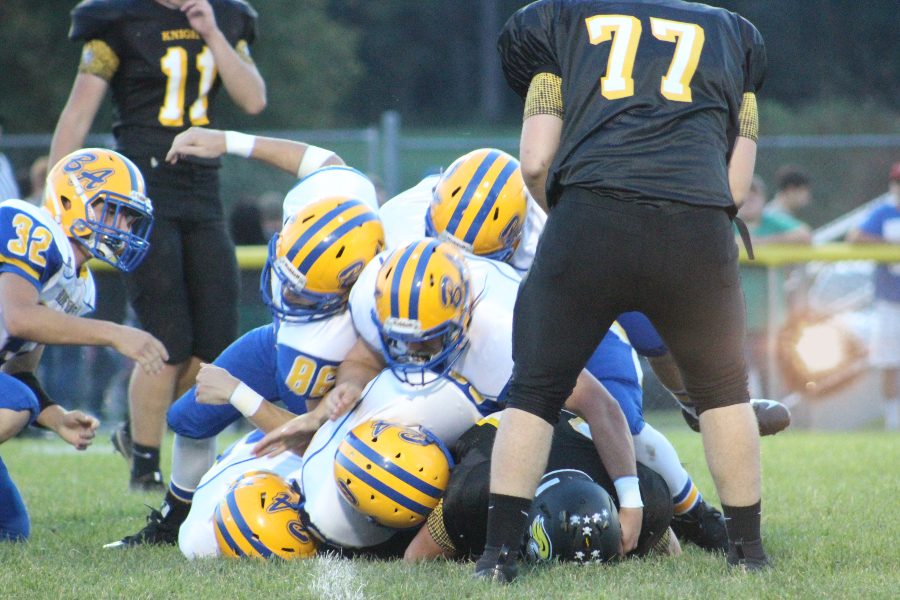 Bellwood-Antis is looking for a team effort to knock off Tussey Mountain tonight at home.

This week the 7-1 Blue Devils stay at home for a big game against 7-1 Tussey Mountain in a game that could determine the ICC champion.

Tussey Mountain has some key players B-A needs to be prepared for, like junior quarterback Mathew Leonard and senior running back Cole Weist.

Weist will be a big threat for Bellwood with his rushing abilities. He has rushed for 904 yards while carrying the ball 191 times and averaging 113 yards a game.

But Weist isn’t the only big rusher for Tussey. Kaden Lucko is also big for the Titans rushing for 321 yards on the season so far.

Bellwood’s defense will need to be locked in  and ready for Tussey Mountains running game.

Defensive coordinator William Crowell, whose grup is allowing fewer than 10 points per game, is excited for the challenge.

“We need to win the plays in the trenches on defense and come out on top,” Coach Crowell said.

Junior linebacker Troy Walker  is ready for a tough test against one of the toughest teams in the ICC.

“We have two big games in a row. We want to end the season with two big wins,” he said.

Alex Frederick said the Devils have spent time this week focusing on tackling technique to prepare for a team that likes to run the football.

“I think as a team we are pretty prepared. We worked on getting low on our tackles instead of tackling at the shoulders,” he said. “Also, we worked on our gang tackles so we don’t allow their running backs to gain extra yards on each carry.”

Offensively, B-A is looking for Fredrick and Senior Shawn Wolfe to come up big for them and put some numbers on the board.

Against Mount Union last week, the Devils rushed for 144 yards and passed for 116 yards in limited action after building a 35-0 lead. B-A is looking to improve those numbers  against Tussey Mountain, with something at least approaching the team’s 212-yard average per game on the ground.

Head Coach Nick Lovrich takes on every game thinking it’s the state championship, and he’s hoping the Blue Devils do the same.

Coach Lovrich said he takes on the task at hand and gets the job done first before he looks ahead to next week’s game, playoff rankings even in Week 9 are not an issue. B-A is currently No. 3 in 2A.

“Right now we are focusing on tomorrow. We can only control what we do, not how the playoffs will be seeded,” he said.  “We believe that taking care of what we can control will take care of what the future holds.”