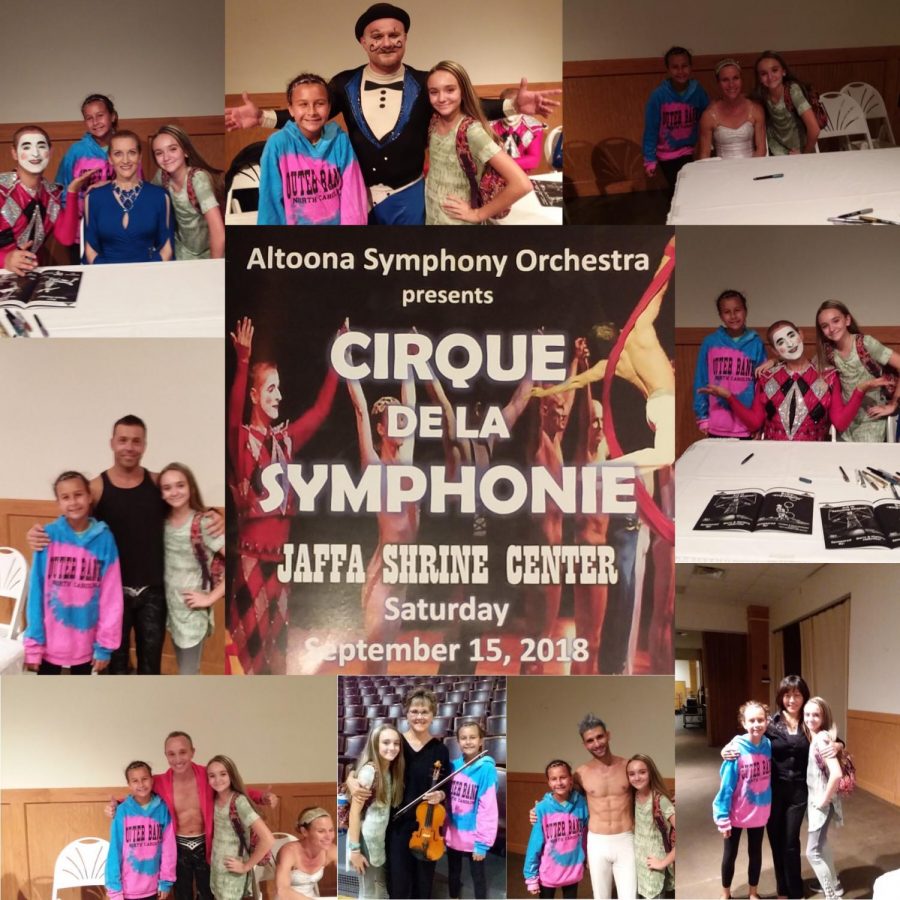 This event showcased acts for people of all ages.

We recently went to to a Cirque De La Symphonie show at the Jaffa Shrine with Annie’s mom, Denise, Annie’s cousin, Holland, and Annie’s two aunts, Kelley and Cindee. The show was pretty incredible. The Altoona Symphony Orchestra played the whole time in the background. Bellwood-Antis Myers Elementary’s retired music teacher and now substitute teacher, Mrs. Wright, was playing her violin. In the show, there were acts called Cyr Wheel, Aeril Duo, Magic Act, Aeril Straps and more! If you would like to learn more about this amazing show keep reading…

The first act was called “Quick Change”. In this act, there was a man that was a jester, and a woman that did a classic quick change. The jester’s name was Vladimir Tsarkov and the woman’s name was Elena Tsarkova. First, the woman was in a big, red dress then after she changed for the first time, she was in a smaller, blue dress. The third time she changed, she was in a long, white gown. The jester was in a big red costume, but he never changed his clothes. He just helped the woman out by pulling up a ring with a black curtain around it for her to change in. Then for the last part one when she changed into the long, white gown, they had a smaller ring with streamers tucked in it. The lady not only changed very quickly, but you could see a little bit through the curtain and all you saw was the long white gown drop down. The magic was really cool!

After that, there was an act with a girl that did “Aerial Silks”. This was performed by Christine Van Loo. In case you don’t know what aerial silks are, it’s when someone uses these ribbons made of 2-way stretch polyester Lycra or Tricot Nylon. The width varies depending on the routine and the acrobat that is performing with them. The acrobat uses the ribbons to do tricks and flips. If you ever think about doing aerial silks you must be flexible, not afraid of heights, and you must be able to do high flying tricks in the air. Van Loo came out with a white leotard with silver on it. She did this act very gracefully and also showed some very impressive skills.

The next act was called “Spinning Shapes”. This act was performed by a man whose name was not given. He had all sizes of shapes such as rectangles and cubes. He spun them around and did tricks inside of them while they were spinning around him. He had really cool blue face paint and a really neat blue costume with sequins all over it. He also had a pretty cool Russian accent.

After that was “Ring Juggling”. This act was performed by the same jester that helped with the “Quick Change”. In this act, this man did all sorts of tricks with glow in the dark rings. At one point, he was juggling six rings at a time! He could bounce them off of his feet and juggle really fast!

The last act of the first of half was called “Ariel Straps.” It was kind of like the “Aerial Silks” act except it was performed by a man and instead of two ribbons, he used cotton or nylon web apparatus. He did really cool flips and splits in the air. A cool fact about him is that his hair was a bright lavender-blue color!

Then before we knew it, it was intermission. During the intermission, we saw Ms. Forshey and she took our picture. She gave us the idea to make this article.

The next act was a “Magic Act”. In this act the conductor, Teresa Cheung, the jester and lady that was in the “Quick Change” did a magic trick. The magic trick was that the jester tied up the lady that was in the “Quick Change”. She and the conductor were both wearing jackets, but when they went inside the quick change curtain, they came out wearing different jackets. It was pretty fast.

The next act was the “Cyr Wheel”. This act was performed by the same guy that did the “Spinning Shapes”. He had a prop that looked like two hula-hoops, except they were stacked on top of each other so he could put his feet through them. He could balance between the two hula hoops and and do cartwheels across the stage.

The next act was “Aeril Duo” which featured the same guy that did “Ariel Straps” and the same girl that did“Aerial Silks”—except they were doing this act as a duo. It was really cool because they performed with two silks and they could do cool tricks together. A neat fact about this performance was that for each aerial act, they changed the color of the silks/straps, so it made the act pretty interesting. This was one of our favorites.

The next act was “Ribbon Dancer” but the entertainer wasn’t able to perform, so the jester went through the audience juggling instead. It was really cool. We liked how he interacted with the audience and had them throw his juggling objects to him. He also played catch with this one guy. It was really humorous. A fun fact is when we went backstage to meet the performers, he played with another man who went backstage too.

The last act of the show, and by far the most impressive part of the show, were the Strongmen. This act demonstrated some incredibly hard skills. Not to spoil it, but a guy did a one handed handstand on the other guy’s head. They did a lot of other awesome stuff too. It was unbelievable.

If you wanted to go backstage to meet the performers, you had to pay $5. Not only did you get to meet the cast, but you got free drinks and a face painting. We had a moustache painted on our faces. The cast was very nice. Once you met them, you could tell they obviously care about their audience and fans. When we were done, we agreed that it was totally worth it.

Overall, the show was pretty amazing. We would love to go to one of these again!