West Shamokin provides tough test for B-A in first round 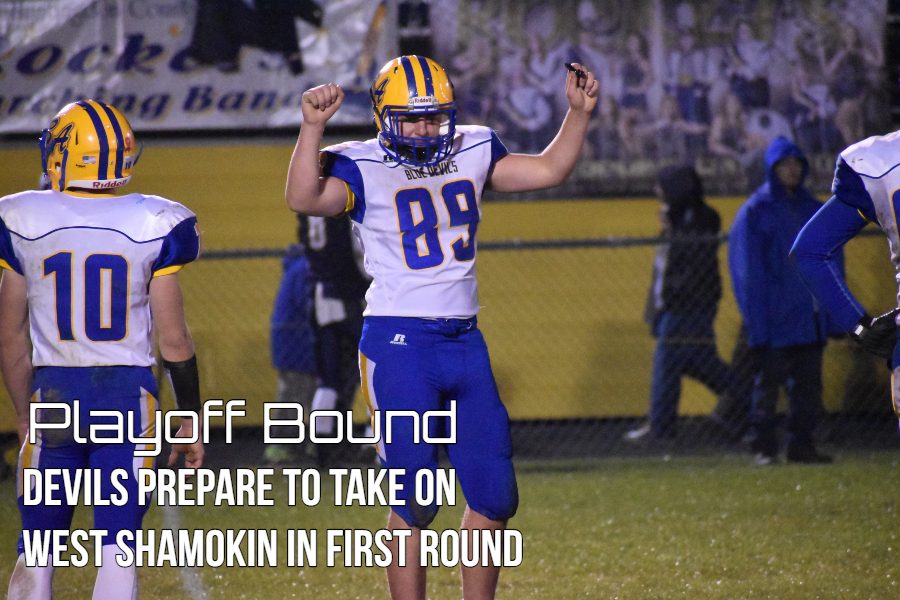 TJ Wyland and the Devils are ready to take on West Shamokin.

Since taking down Southern Huntington on the road last Friday, the Blue Devils are locked into the third seed in the District 6 2A playoffs Saturday.

The Devils will play at Memorial Stadium against No. 6 West Shamokin at 7 p.m.

Brendan Mondi has rushed for 1,067 yards on 158 carries, scoring 15 total touchdowns through ten games and he’s looking to continue this against Bellwood, but the Devils have other things in mind.

“I think they are pretty good. The games they lost were all pretty close except for their Ligonier Valley game,” said B-A coach Nick Lovrich. “They have some weapons on offense and their defense is pretty tough.”

Last week, the B-A defense was a bit shaky in the first quarter, allowing Southern Huntington to score three touchdowns, but afterwards they  stepped up their game. B-A is scoring more than 34 points per game, while allowing just over 10. The Devils have two shutouts and three games holding opponents to one touchdown, and they haven’t lost since falling to Tyrone in Week 1.

“We need to play with a high level of intensity and passion,” said defensive coordinator Bill Crowell. “We need to stay focused and play our own responsibility and gaps and play as a team, give 100 percent on every play and don’t worry about making a mistake.”

Coach Crowell was upset last week they gave up two big plays on defense that really hurt the Devils.

“We need to play fundamentally sound, hardnosed Bellwood football. We need to make them earn every yard they gain and avoid costly mistakes that can lead to big plays” said Crowell.

Last year’s loss to Westmont Hilltop at home in the first round is still fresh in the mind of the Devils, but coach Lovrich said B-A’s recent bad luck in first round games changes nothing.

“We have the same mentally we had all year. We can’t do anything to change last year’s results, so there is no sense talking or worrying about it,” he said. “We can only control what we do this Saturday night. We want to be the best team we can be Saturday night. We just got to play better than we did last week.”

If the Devils win it will set up a matchup between B-A and the winner of the game between No. 2 Ligonier Valley and No. 7 Marion Center.