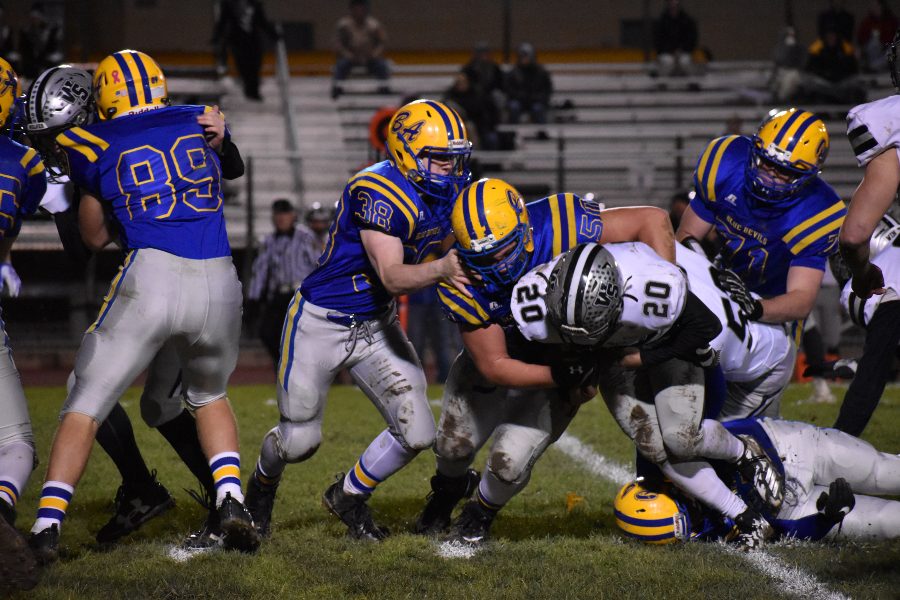 Bellwood's defense - and the team as a whole - got a huge stop Saturday against West Shamokin.

On Saturday night, the Bellwood-Antis Blue Devils showed they could hang in a tough test against the West Shamokin Wolves.

The Devils took down the Wolves 14-6, proving that they are playoff contenders.

While the Devils fought long and hard, they  couldn’t find the end zone in either the first or second quarter.

Both teams went scoreless going into the second half and both looking to make that change.

B-A came out firing in the third quarter, making it 7-0 with senior TJ Wyland receiving a 24-yard pass from quarterback Shawn Wolfe with 7:42 left. The play was set up by a long punt return by Zach Mallon.

In the fourth quarter, Zach Mallon found a hole and made an 18-yard run to put Bellwood up 14-0, giving the Devils some breathing room with just over five minutes left.

This gave the team momentum down the stretch, holding the Wolves scoreless until the end of the fourth quarter where they scored on a 1-yard run by Brendan Mondi with three minutes left.

After the Wolves touchdown, Wyland came up with a big stop on the goal line as West Shamokin attempted a two-point conversion.

B-A survived to face No. 2 Ligonier Valley, and they’ll have to improve at taking care of the football against the undefeated Rams. One reason West Shamokin hung around as long as it did was the Devils’ shot themselves in the foot with four turnovers.

“It is important that we secure ball going into this week’s game,” said Coach Nick Lovrich. “Last week we turned the ball over too many times, which resulted in us not being able to have scoring chances.”

Ligonier is the defending 2A champion and averaging more than 40 points per game, which makes improvement on defense important for this week.

“On defense we need to keep our feet moving and keep our eyes up, so they don’t catch us on our heels,” Coach Lovrich said. “They are a very good team and they have some very good players that we need to watch out for.”