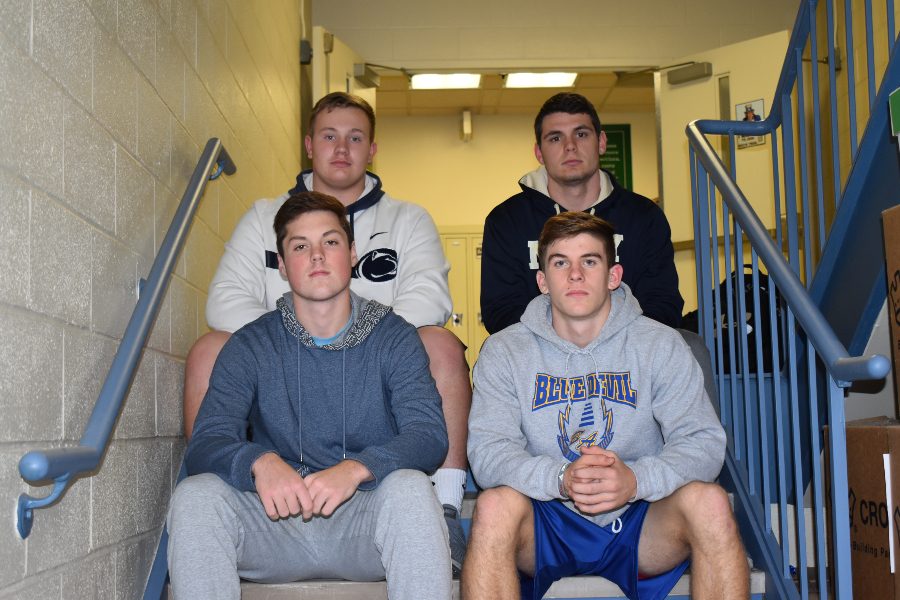 Bellwood-Antis had four foootball players named to the All-ICC first team. They were (front row, l to r): Troy Walker and Alex Schmoke; (back row, l to r): Evan Pelligrine and Caden Nagle.

The Bellwood-Antis football team capped off the ICC championship with four members being selected into the ICC All Star first team.

Senior Caden Nagle made first team as an offensive lineman and defensive end as one of five two-way starters on the offensive and defensive first teams. Bellwood was able to rush for 2,358 yard this season with the help of Caden Nagle on the O-Line. Defensively he had 9 sacks and 10 tackles for loss to go along with a fumble recovery and an interception.

Senior Alex Schmoke was selected as the first team kicker. Schmoke made 48/50 Pats in the 2018-19 season.

Junior, Troy Walker was assigned to the first team as a linebacker. He assisted the team this year with 54 tackles despite missing games due to an injury.

Junior Evan Pelligrine being put on first team as a defensive lineman, after helping out with a total of 66 tackles this past season.

Head Coach Nick Lovrich said, “I was very happy with our selections for the ICC All Star teams.  We were very balanced team as far as stats go, but that is what happens when you have a lot of players who are contributing to our success.  I believe this season we were truly the epitome of a team.”

The ICC also announced a second All Star team, and Bellwood had 6 players on the second team.  Senior Shawn Wolfe made the second team going both ways, quarterback and defensive back.

Schmoke was announced as second team punter and Pelligrine as an offensive lineman.  Senior Andrew Hale,made the team as wide receiver, and to round out the second team were two sophomores: Nick Plank at linebacker and Zach Mallon at kick returner.