Athlete of the Week: Casi Shade 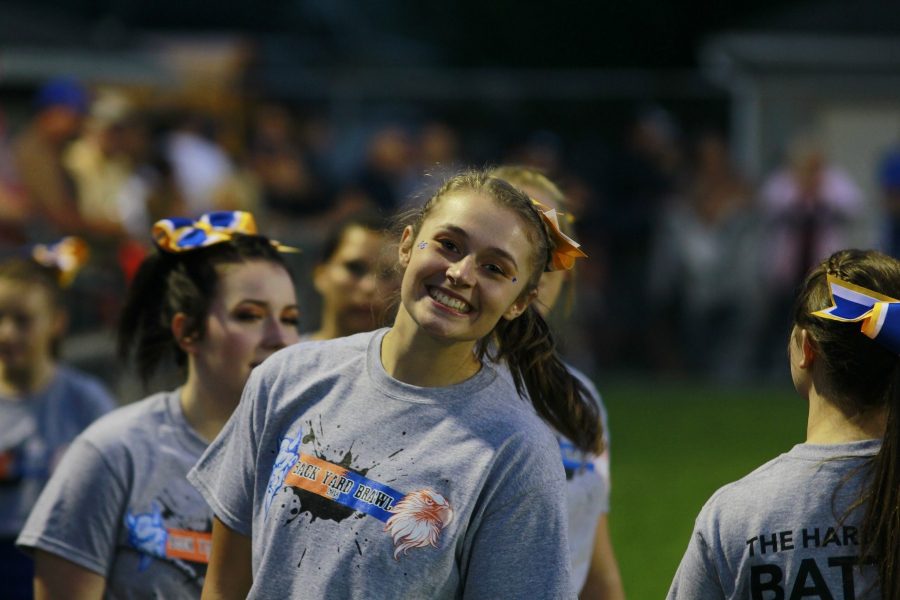 Junior Casi Shade has grown into a leader on the cheer squad.

Casi Shade is this week’s Athlete of the Week. Casi is the captain of the cheer squad and she also plays softball.

As captain, you can’t let your squad quit.

“She gives 110% and more. If we feel like we might give up, Casi doesn’t let us,” says freshman Emma Chronister.

Casi’s goal for this season was to compete at a competition, which the squad did on December 15 and is going to again on February 2. Her other goal is to work better together as a team which she feels the squad is succeeding at.

Casi is currently cheering with a partially torn rotator cuff. The Wednesday before the squad’s first competition, Casi tore it while performing the squad’s final pyramid at a basketball game.

“It’s not 100% stable, but since we have another competition coming up, I wanted to get back so we could start working on our routine again,” said Casi.

Cheerleaders have positions when stunting and competing. Casi is a back and occasional base.

The cheerleaders compete and practice, which is everything a sport does; therefore, Casi considers cheerleading a sport.

Because of the cheerleaders competing for the first time in 15 years, they are starting to get more recognition in the school and community.

“We do so much that goes unseen. People don’t actually understand what we do and how hard we work, but now people are starting to realize it,” said Casi.

Casi has been cheering since she was seven, when she began cheering for the Northside Red Devils.

“Being committed to cheerleading for so long, I don’t know who I would be without it,” says Casi.

Casi’s favorite part about cheering is being apart of something bigger than herself, and her favorite memory is cheering for her best friends at the girls basketball state championship game in Hershey.

Casi always aims to please and the main person to please is Coach Chrissy Shura, which she has most definitely done this season. Casi had to step up as captain because of the cheer squad’s lack of seniors, but she has done a tremendous job.

“Casi is such a great asset to the Varsity squad. Her positive attitude is contagious and she is always thinking of new ways to improve the squad and our routines. I love having Casi on the squad and I am proud of her for working so hard to improve her skills this season!” said Coach Chrissy.