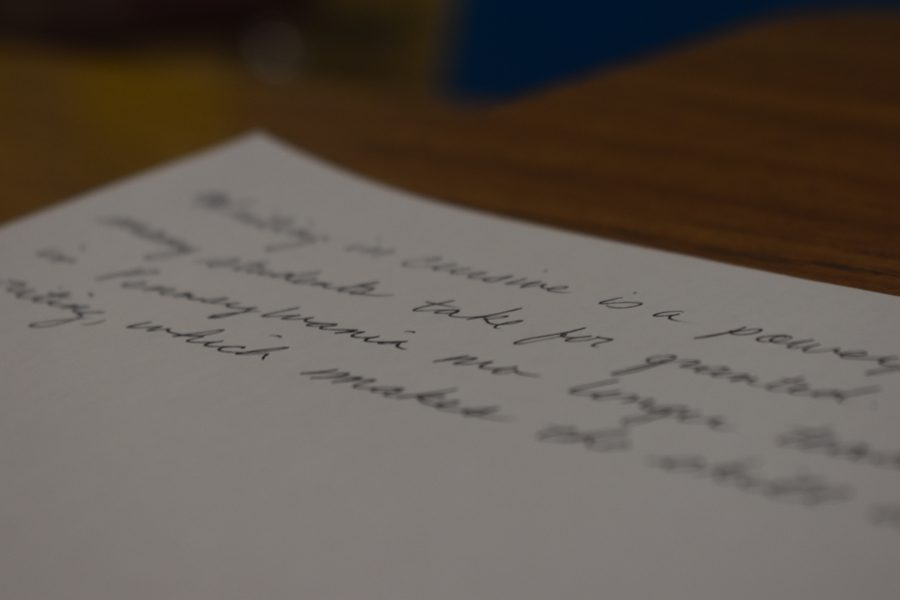 Cursive writing is a skill slowly dying out in elementary schools.

You’ve heard of the Declaration of Independence and the Bill of Rights, two well known documents written in cursive. The penmanship gives a different look to the documents and associates the cursive writing form with things that are important.

But the value of this writing style goes way beyond the aesthetic look. The original purpose of this style of writing was to make writing more efficient, back in the times that writers still used quills, but in 2019, many schools are going away from the practice.

Years ago, cursive writing was a very common lesson if only so students could sign their names. Recently, some schools have strayed away from instructing this writing style.

Fundations is a multi-sensory, structured language program created by Barbara and Ed Wilson. Although this program was founded for the aid of dyslexic children, it is used all over the country.

Cursive writing in the Bellwood district begins in third grade and follows the program set by the Wilsons.  However, with the growing development of technology, the use of the cursive writing technique has become obsolete. But eliminating cursive writing comes with detrimental consequences.

Researcher Suzanne Baruch Asher noted in her studies that this style of writing “stimulates the brain like no other.”

She said in one New York Times op-ed piece that, “Cursive handwriting stimulates brain synapses and synchronicity between the left and right hemispheres, something absent from printing and typing.”

This shows that cursive writing uses both sides of your brain, which does not happen with most activities.

Bellwood-Antis third grade teacher Mrs. Erin Kelly agrees with the findings of Asher and other proponents of cursive writing.

“We believe that being able to read and write in cursive is still an important skill,” she commented.

Many people agree, especially those who have completed school and learned the writing practice.

In an article written by Liana Heitin Loewus for the Education Week’s blog called “Why Don’t the Common-Core Standards Include Cursive Writing? the comments section was running rampant with parents concerns of their children’s education.

Fifth grade teacher Mrs. Christine Gonder was an avid cursive teacher in the past. She used to have large cursive packets where students would have to trace her cursive and copy it on the line below. Now, she has slowed down her teaching because cursive writing is not a “state standard.”

She still writes in cursive on the board so students still need to read and understand her writing.

She agreed with the fact that a lot of the times, cursive is used in the workforce, especially by older employers and bosses.

“I think it’s important that they at least know how to read cursive,” she said.

So even though the teaching of cursive is slowing, the practice of reading it and understanding it is still important in the Bellwood-Antis School District.