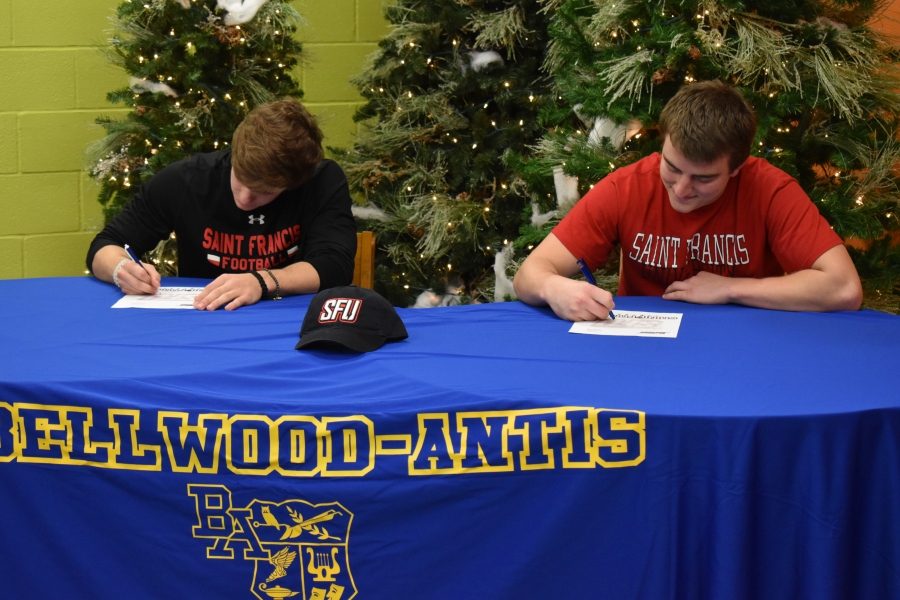 Wyland and Schmoke are officially part of the red flash!

Former Athletic Director and football coach John Hays made a special appearance at the signing. Coach Charlie Burch, Coach Bill Crowell, and and current B-A head coach Nick Lovrich also showed up to support the players, who also had their families on hand.

“We as a football program are very excited for Alex and TJ to be continuing their football and academic careers at SFU,” said B-A coach Nick Lovrich. “Both of these student-athletes were integral parts in our success this year.  I think they will make a positive contribution to the SFU community athletically and academically.  We are very proud of them and wish them well in Loretto.”

“My brother and mother both went to college there and it is really close to home. The atmosphere there for sports and academics is awesome!” said Wyland.

For Schmoke, he made 2 field goals with 48 out of 50 extra points. He achieved 19 touchbacks and ended with a 54-yard average on kickoffs.

“I chose Saint Francis because they were the first school to recruit me. They made me feel like I could seriously play at the next level. It was the best choice for me academically, and I really felt at home,” said Schmoke.