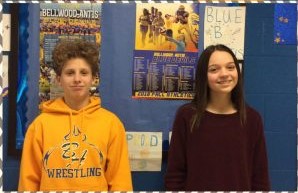 If you had a magic wand and could change anything about the school, what would you change? What if you were the principal? What kinds of things would you do? Well, we asked two seventh graders, Kate Heisler and Josh Dorminy, their opinions about a couple of school situations. This is what they had to say about it.

Q1: If you had a magic wand and could change anything about the school, what would be the
number one change you would make and why?

A1: Kate would change how big the classrooms are and how modern the school is because she feels they are too small and need to be updated.

A2: Josh would rather we have our phones in school instead of iPads because he doesn’t really like them.

Q2: If you were the principal and found yourself in charge of us, what would be the first thing you would do?

A1: Kate said that if we were doing well and behaving, she would reward us with Spirit Weeks and movies with popcorn.

A2: Josh said he would better enforce the rules we have now and create new school rules that might be better.

Q3: What makes a good teacher/principal?

A1: Kate thinks that it is about how fun they make things and how lenient they are.

A2: Josh thinks that it is about working and doing your job, but at the same time making it enjoyable.

Q4: What traits make up a good student?

A1: Kate said she thinks it’s the way they act and how responsible and trustworthy they are.

A2: Josh thinks it’s about how cool they are.

Q5: Here is a list of 3 teachers and administrators, what movie/TV actor most resembles each
teacher or administrator? Why?

A1: Kate thinks DJ (Candace Cameron-Bure) from Full/Fuller House because she is a good role model and she is upbeat.

A2: Josh thinks Sandy Cheeks from Spongebob because she lives in air and is helpful.

A1: Kate thinks Uncle Jesse (John Stamos) from Full/Fuller House because he sings the preposition song and is caring.

A2: Josh thinks Will Smith off of The Fresh Prince of Bel-Air because he is funny.

A2: Josh thinks Mr. Hughes is like Tom Hanks because Tom Hanks is cool.

Q5: If school were a movie, what movie would we all be in?

A2: Josh said, “Jumanji because school is an adventure.”

Q6: If you had the power to hire anyone in the world to be your teacher, who would you hire and why?

A1: Kate thinks Drake and Cardi B because it would be funny to watch them teach.

A2: Josh thinks Will Smith because he’s cool.

We had an awesome time interviewing Kate and Josh and listening to the answers to our questions! Stay tuned… Maybe the next article will be about you!