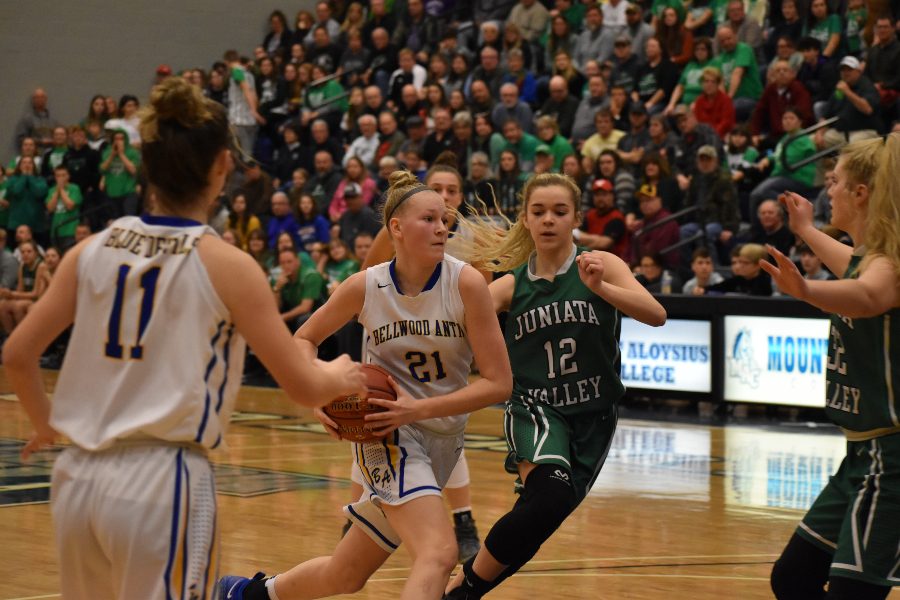 Alli Campbell drives to the hole for two of her 22 points against Juniata Valley.

Throughout the past years, the Bellwood-Antis girls basketball team has been a top seed multiple times, but has been unable to capture the District 6 title.

The team has had many high caliber players from Karson Swogger, Ana Hollen, Abbey Crider, and Megan Claar, but were still unable to bring home a D-6 Championship win.

Last night, the Lady Blue Devils overcame that slump by defeating rival Juniata Valley in the late minutes of the fourth quarter, 52-49.

Early into the game, the Lady Devils took the lead from Junior Emilie Leidig’s three pointers.

Going into the second quarter the Hornets came back to make it a 2-point game going into half time.

The Devils and Hornets went back and forth through the third quarter, exchanging the lead up until the fourth quarter when Juniata Valleys key player, Halee Smith, fouled out with four minutes left to go in the game.

With Smith fouling out, Bellwood had to capitalize on JV’s loss and pull ahead late in the game.

While time was winding down, Juniata Valley had to keep fouling to stop the clock. That’s when Junior Alli Campbell came in, scoring 12 of her 22 points in the fourth quarter.

Senior Riley D’Angelo was very excited to get the D6 win last night. She said “We are the comeback kids so we always keep the faith, we’re never out of the game.”

Head Coach of the Lady Devils, Jim Swaney, said, “We are very proud to come out as District Champions in such a competitive district. I don’t think it would be a surprise to anyone if the district 6 teams have a lot of success in the state tournament.”

Both Bellwood and Juniata Valley will advance to the state tournament along with Penns Manor and Blairsville.

Along with Riley, Coach Swaney knew that the girls were not about to give up.

“We needed to come out in the second half with a little more fire in our belly and match their (Juniata Valley) aggression. I think we did just that.” said Coach Swaney.

Swaney is still trying to take all this in. He said “I am very honored and humbled to be able to coach this team. I know our kids appreciate the support they are given by the school and community. It is truly something special and I have never experienced that.”