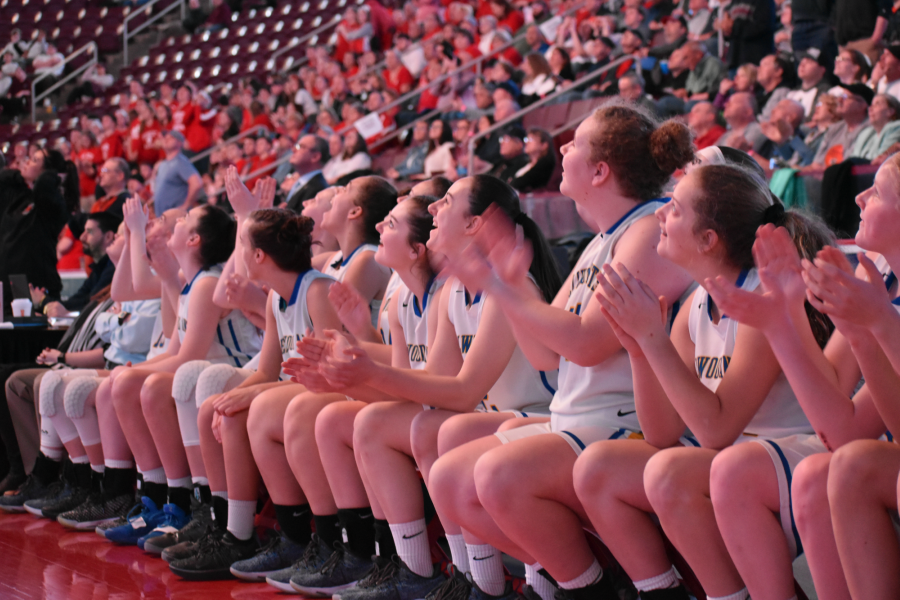 Bellwood-Antis won their second state title in a row yesterday in Hershey.

Without Jaydyn Shuke and Macy Decker, the team would’ve been in trouble early.

Shuke scored the first 3 points of the game while Decker ended up putting 9 points on the board in the first half to help lead the Lady Devils to a 66-57 win over West Middlesex in the PIAA 2A Girls State Championship game.

“I wasn’t nervous (after they took the lead),” said senior Riley D’Angelo. “I knew we’d come back. We’ve been starting slowly all playoffs, but I knew we would be fine.”

Early into the second quarter, Junior Jaydyn Shuke stepped up and drained a huge three to spark a scoring streak for B-A.

Shortly after Shuke’s three, junior Macy Decker checked into the game for Jaydyn and then netted 3 back-to-back-to-back three pointers to really get the girls going.

“I saw in the newspaper they didn’t even put me in their scouting report,” said Decker. “I’ve shot a lot of shots, so at some point they’re going to fall. I just didn’t think it would be in the state championship.”

Going into half time, the Lady Blue Devils had the lead 27-23.

Coming out of the half, Bellwood had the momentum and were ready to get the job done.

In the third quarter, the girls took over and extended the lead to double digits with a pair of threes from Alli Campbell. West Middlesex went on a 6-0 run to close the period and get them back in the game and have hope of securing the title.

The Lady Devils said the experience of a challenging PIAA tournament helped them when things got tough in Hershey.

“We’ve played games before where teams have come back on us,” said Emilie Ledig, who along with D’Angelo scored 8. “That helped us, and we were able to stay confident.”

D’Angelo said the back and forth nature of the game made it enjoyable.

“It was a relief we were able to make shots compared to last year when no one was making shots,” she said. “It gave a different energy to the game and it made it more fun because it was a shootout.”

Campbell added 11 in the fourth quarter as part of a game-high 24, 21 of which came in the second half.

Sakeria Haralson added 14 and provided strong defense on Lady Red center Makennah White, who led her team with 18, 11 of which came in the third quarter.

“I think we played well as a team. The game got more physical than I expected it to be, but I’m glad that we came out on top,” said Haralson.

The win gave B-A two PIAA titles in a row and allowed the Lady Devils to finish the season 27-3, while West Middlesex ended its season 26-4.

For D’Angelo, who started both PIAA finals games, it was a nice way to go out.

“This has always been the dream and we talked about it a lot, but there’s a big difference between talking about it and going out and doing it,” said D’Angelo. “I am beyond grateful that we have had this opportunity.”

“Both wins were very exciting, but I feel I contributed more this year, so it’s very special,” said Decker.

Leidig, who as a junior could get one more PIAA trophy next season thought of the team’s accomplishments in broad terms.

“It’s nice knowing we did it two times in a row and made history,” she said.