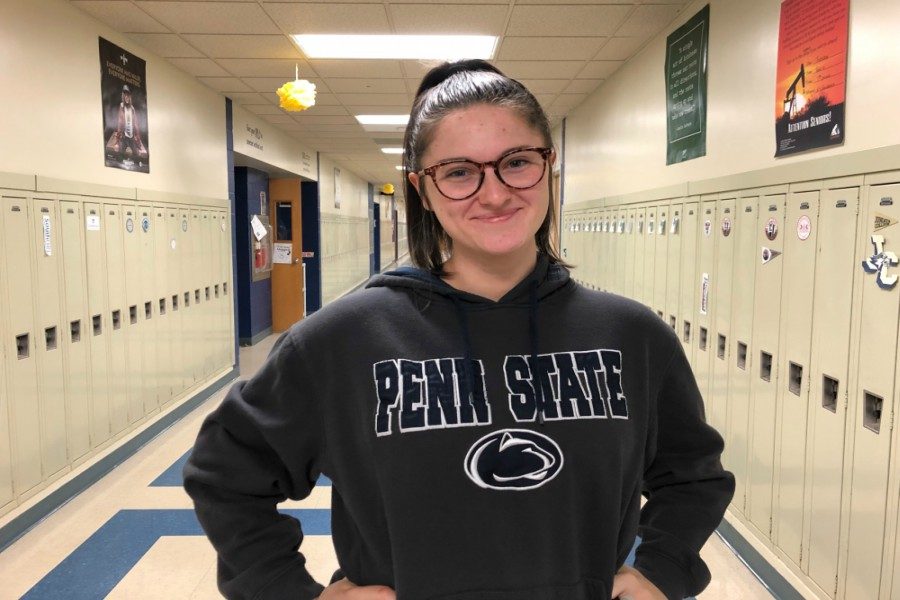 Mya Decker is our next Spotlight on Staff!

What do you enjoy about BP?

I enjoy working with Kaelynn and Mr.Naylor. We’ve had our moments but they were mostly great. 🙂 I also really like being able to take part in an award winning school paper. We are all really proud of the website and it has been super cool watching our stories have impact. Kaelynn and I work really hard and its good to see others appreciating it!

What’s your favorite things you’ve done in BP so far?

UMMMMMM. Definitely “Forgotten Bellwood”… I’ve learned a lot about the school and it is super cool to see Tim Mercer get excited to film with us each month! Also that fact that the community was really excited for each episode was awesome! Mrs. Davis’ class was even watching them in their study halls and I got to go down a couple times and answer any questions they still had, that was cool! ORRRR taking pictures on the court at the giant center for the girls state game… my sister is on the team and it was super cool to see her make a 3 pointer and be able to high five her when she got to the bench and I got some really cool shots! ORRRRR my “2 Cool 4 School” segment. It was a small idea at the beginning and it turned into a weekly-ish thing. I also got to see the impact that had on students and their parents and that was meaningful to me also….sooooooooo I guess I can’t pick lol 🙂

What would you tell a person considering joining BP?

Freakin’ do it. But only do it if you reallllyyy want to. You have to WANT to write or it wont be rewarding. Blueprint has given me a lot of experiences I wouldn’t have had otherwise thanks to stories I’ve written and the people I’ve worked with! I really wish it would have fit into my schedule sooner! This isn’t a blow off class..we write to inspire and to win!

What are you involved in outside of BP?

I was a dancer at MSDC but I decided that wasn’t for me anymore. I’m the president of Renaissance Club, the president of Aevidum, the Operations and Entertainment Chairman for Mini-THON, the treasurer of Key Club, NHS, and Blueprint Independent Study. I guess outside of school I work anddddd watch a lot of Friends on Netflix with my buddy Alex Roberts. I guess that’s kinda boring but :)