Arming Teachers: Could it be the solution we need? 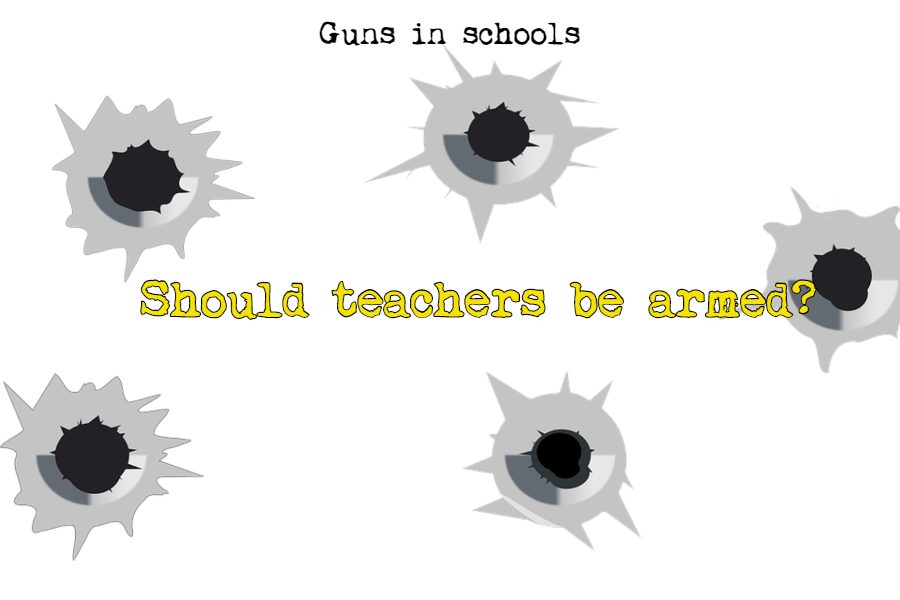 School. Where parents send their kids for the day. They’re expected to learn, no interruptions, to be safe, but sadly, that’s not reality.

In 2018 alone there were twenty-four school shootings. The National Education Association (NEA) has described the situation as being in a “crisis stage”. That’s really alarming and it has the students and citizens of America looking for a solution.

Many schools have implemented new security measures like security guards and metal detectors. Bellwood-Antis has even hired two security guards to patrol Myers Elementary and both the middle and high schools.

People have also suggested stricter gun laws and reform, while on the other side people have suggested putting guns in the hands of teachers.

According to the NEA, a majority of high school teachers are against teachers carrying, but there are obviously supporters. Bellwood, like any school, has both.

“I do not think teachers should be armed,” says Mrs.Flarend, who pointed out a few valid flaws in the idea. For example, there is the danger of students possibly getting a hold of the guns.

“Guns have already been accidentally left in school bathroom by school personnel!” she said. This is in fact very true. According to a Giffords study, guns belonging to teachers and officials have been left unattended in schools at least 60 times in the last five years. Three of these incidents were in Pennsylvania. There is obviously a slight problem here.

“This problem is a community problem and it will take communities working together to solve it.  Placing a weapon in the hands of a teacher does not fundamentally do this,” Mrs. Flarend said.

On the pro side is civics teacher Mr.McNaul, an avid gun enthusiast who does gun safety instruction in his free time.

When asked if he would be willing to carry he said that he would be the first to volunteer. Unlike Mrs. Flarend, Mr. McNaul believes that students won’t really have the opportunity to get a hold of the weapons with proper training given to the teachers.

“Kids would not know who is carrying… Also, communication in education is key to alleviating any fears people might have,” Mr. McNaul said.

Funded by donations, classes are provided at NO COST to your school district!

The program offers a carefully-structured curriculum offering over 26 hours of hands-on training over a 3-day class that exceeds the requirements of the Ohio Peace Officer Training Academy.

The purpose is not to replace police and EMT, but to allow teachers, administrators, and other personnel on-site to stop school violence rapidly and render medical aid immediately.
The training involved in this program is ongoing and extensive and is nearly equal to that of the police. Could programs like this really help with the school shooting epidemic? Mr. McNaul thinks yes.

However, the teachers aren’t the only ones with a say.

Freshman Sarah Berkowitz sides with Mrs. Flarend. She went to March for Our Lives in Washington and says it gave her an interesting view on the subject.

“It’s confusing to think about. My initial thought is no (to arming teachers), but statistics make you wonder,” said Sarah. Even though her opinion wavered at first, she still believes there is another, better solution out there. “It should be a last resort. There’s got to be a better way.”

Siding with Mr.McNaul is junior Faith Patton, who says that if teachers were armed, she’d feel a lot safer.

“If the teacher has a gun when an intruder comes in, they could respond,” she said.

Mass shootings have been becoming increasingly more common, even in schools, so it is up to us as students, teachers, parents, law makers, and Americans to find a solution. That solution could be to arm teachers and school faculty, but maybe gun control is what’s best.

What do you think?