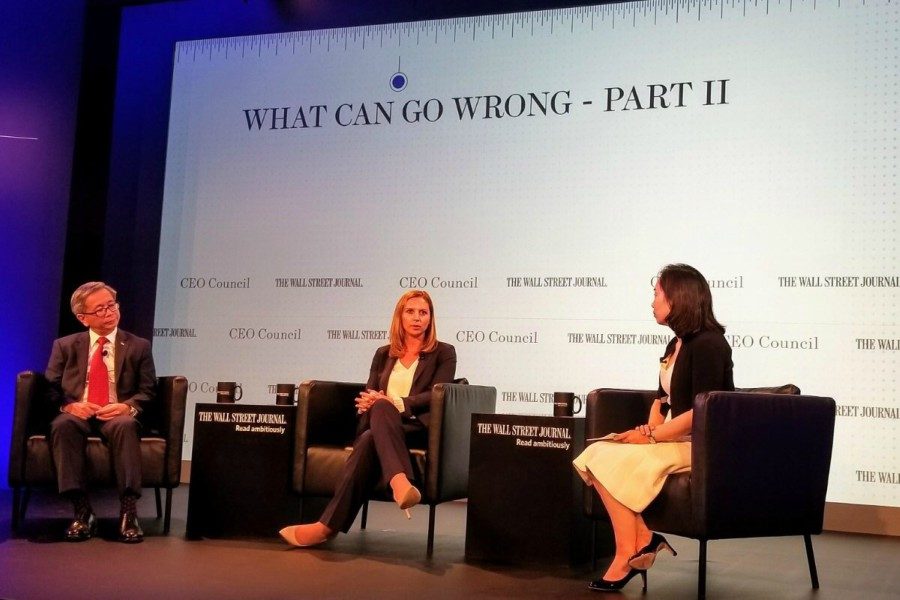 In the middle is Cheryl Davis at a Wall Street Journal CEO Council meeting in Tokyo.

The graduation speaker for the class of 2019 is Cheryl Davis. Many in the BA community may recognize her maiden name of Rumbarger. Her father, Mr. Jim Rumbarger, was a former music teacher and is now substitute at BA.

“I am so incredibly honored and humbled that I was chosen to speak at the school where I came from,” said Davis.

Davis graduated in 1998. She spent her first and second grade years at BA until she and her family moved to State College. Eventually she came back to Bellwood to finish her junior and senior years of high school. While in high school, Davis ran the 3200 in Track & Field. She also participated in Cross Country, and Chorus.

She earned her Bachelor’s and Master’s Degree in Chemical Engineering and a minor in French from Penn State. Mrs. Davis conducted research and analysis for the Center for Naval Analyses and at the Penn State Applied Research Lab.

After her time in labs and collecting analysis, she decided to take her skills to the United States Government. Davis is currently the Senior Director for Strategic Initiatives at Oracle. Oracle is an American multinational computer technology corporation. Before this, she was the Director for Cyber Response Policy at the U.S. National Security Council. Here, she led the development for whole-of-government responses to ill-intended cyber activity that posed as a threat to the United States and its allies. Before this, Davis was the Principal Director for Cyber Policy  at the Department of Homeland Security. This is where she worked to coordinate and unify the Department’s cyber policy positions. Cheryl has also served on the staff of the Office of the Security of Defense, where her main focus was on cyber and intelligence policy issues.

Davis has also coordinated the implementation of the bilateral U.S.-China Four Point Agreement. This set rules in place for the cyber-enabled theft of intellectual property for commercial gain by nation-state actors.

“The jump from chemical engineering to cyber security all started with me recognizing that I really wanted to be involved in the national security space somehow,” said Davis.

Commencement will take place on June 6.

“With her coming to speak, it shows our students that you can have success even on a national level,” said high school principal Mr. Richard Scherier.

Every year, Mr. Schreier goes through a extensive process to pick the perfect graduation speaker for each graduating class.

“What I look for in a speaker is someone who has a wide range of careers and who would be relateable to most of the student body,” said Schreier.