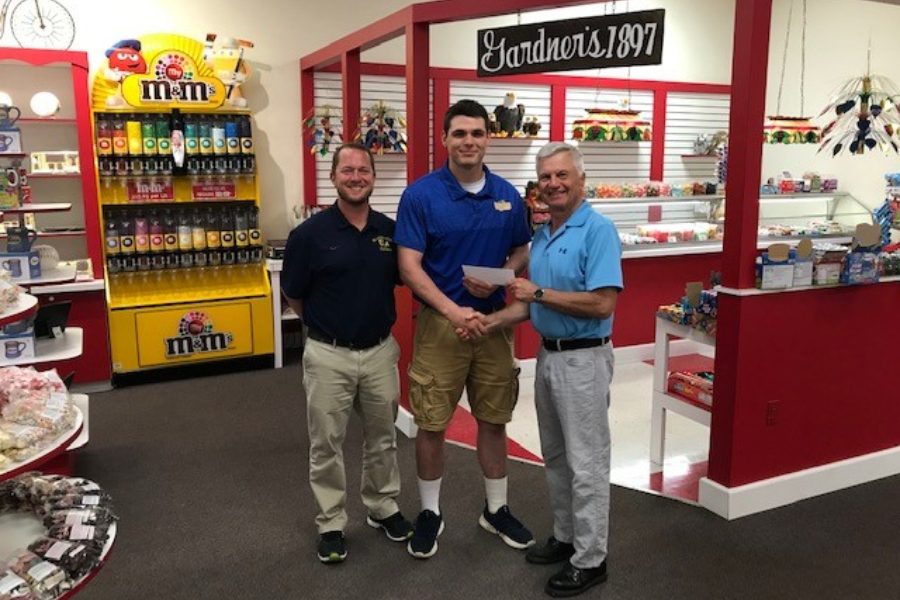 On Monday, Bellwood-Antis senior Caden Nagle was awarded a scholarship sponsored by Gardners’ Candies through the National Football Foundation’s Central Pennsylvania Chapter. It was an honor he learned he received at the organization’s twenty-second awards banquet in March.

He was presented the $1,000 scholarship at Gardner’s Candies store in Tyrone by company president Sam Phillips.

“It is a very hard scholarship to get, so this is a pretty big deal,” said head football coach Mr. Nick Lovrich.

It is a very prestigious and exclusive award. At the banquet, which took place at the Penn Stater in State College, nominees were able to listen to Penn State head coach James Franklin and NFL long snapper Jon Condo, who went to Philipsburg-Osceola.

“Overall it was awesome. Mr.Phillips is a nice man. It’s a great way to tie off my football career at B-A and a great honor,” said Caden

There were over 50 schools covered in the Central Pennsylvania Chapter and Caden was one of about 10 winners, Coach Lovrich said. Scholarships were awarded based on athletics, academics, and community service.

“I think it is a great honor. It really shows that he is well-rounded as a person and the type of person we want on our football program,” said Coach Lovrich. “Caden was the leader on the team in the three areas. We have a lot of guys, but Caden was our nominee and it was great that he won.”