BAHS bans cell phone use in most areas of the school 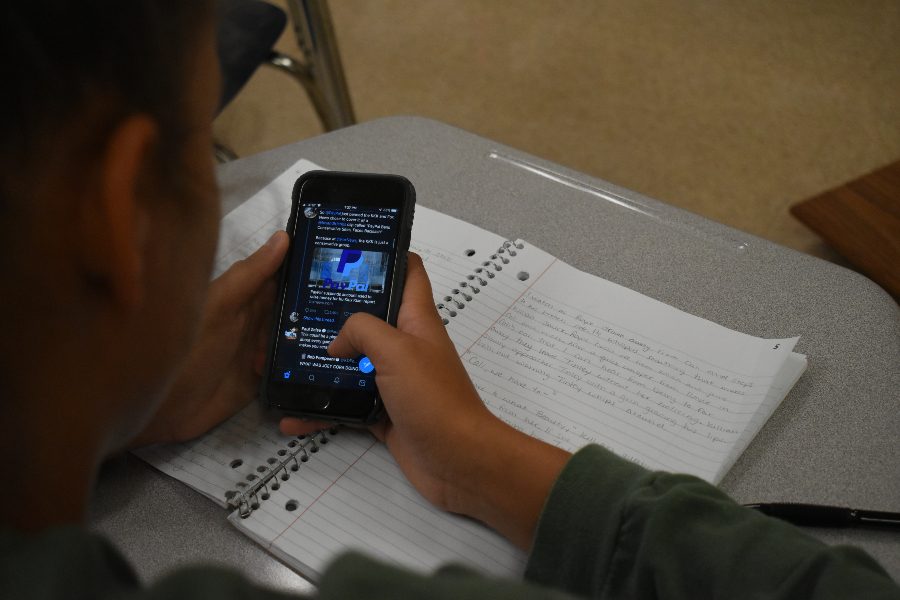 Students can no longer use cell phones in classrooms at Bellwood-Antis.

Since 2016 Bellwood-Antis High School has allowed students to have personal electronic devices during school and use them in certain locations. Students have been able to use their phones in homeroom, the cafeteria, and in the media center.

Those rules have been tightened dramatically to start 2019-2020.

Now, students are only permitted to have their phones and other PED’s for half an hour a day during lunch.

It’s a change that has not been embraced with open arms by all members of the student body.

“I never saw phones as an issue, even when I had it on me in class. I never thought about grabbing it and checking it. The rule change is honestly pointless. More students are just going to sneak around and find time to be on their phone,” said Casi Shade.

At the end of 2018-2019, faculty and staff expressed their concerns over students having phones and since has caused big changes.

Teachers made suggestions for rule changes at the end of last school year.

“It is all the staff together wanting concrete rules and regulations to follow. It isn’t just me writing the rules,” said Mr. Schreier.

According to disciplinary records, last school year there were 54 cellphone infractions due to 27 different students. Twenty-four of the infractions were committed by five students. Eleven students got to the second offense, meaning two infractions. In last year’s ninth grade alone there were 23 infractions.

The media center will no longer support or allow students to have PED’s while at the media center. Faculty and Staff have almost completely cut use of phones during the school day with the exception of lunch.

Any other time during the day students are told to keep their phones and other electronic devices off and in their lockers.

“It is our main idea to help students focus on school and to create a better learning environment. We tried the route of giving freedom to students, now we are taking the temptation away. I feel as students will feel healthier in the long run,” said Mr. Schreier

Students already are expressing themselves about the new cell phone rules. Senior Travis Luensmann believes the changes we unreasonable.

“I feel personally that the change was a little unreasonable. I think all students are facing this verdict due to actions of only a small majority of students.”

Lunesmann thinks the change was unnecessary.

“It should be up to the students to determine their education, in that choosing to listen or not will decide their grade,” he said.