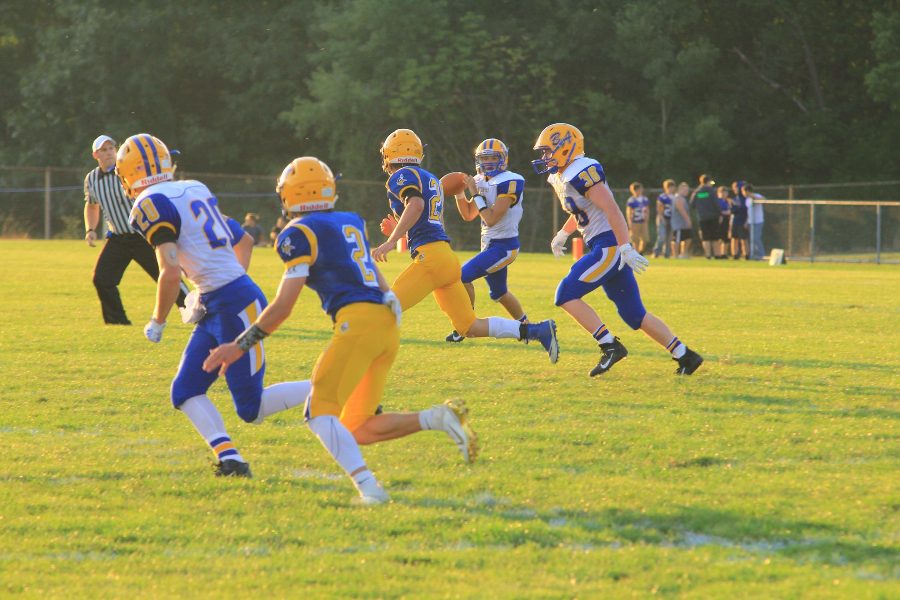 Trevor Miller drops back to pass against Glendale.

Friday’s game at was a great example of a good ol’ fashion beat down.

The Blue Devils came back down the mountain with a satisfying 48-0 win over Glendale. The Devil’s were in it for the long haul, keeping the ball on the ground and wearing down the Vikings throughout the entirety of the game. Fueled by juniors Zach Mallon and Nick Plank, who each had rushing and receiving touchdowns, and also stellar defense by rising star Ty Noonan, Glendale really had no answer.

B-A led 7-0 after the first quarter before exploding for 21 in the second for a 28-0 lead at halftime. The Devils put the game away with a pair of touchdowns in the third.

Zach Mallon led the team with 87 yards rushing, while Trevor Miller went over 100 yards passing for the second straight week.

With only five first downs the entire game, the Vikings could never really get the ball moving in their favor. It also didn’t help with the added pairs of interceptions and fumbles.

The Devils now prepare for next week’s game at Memorial Field against the Hornets of Juniata Valley. Coached by Bill Musser, the Hornets are currently standing with a 2-0 record, with a 30-10 win over Mount Union last week.

Senior quarterback Caden Rupert lead the Hornets in passing yard with 105 on 11 of 16 attempts. Another Hornet senior, Grant Musser, rushed for 17 yards on 2 carries, the most out of any Hornet in the game. Junior Gabe Brower led in receiving yards with 39, while only being target 3 times.

Defensively, two Hornets lead their team with tackles with 7 a-piece. Game time on Friday is 7 P.M, though with animosity in the surroundings, game time is actually Friday at 12 A.M.