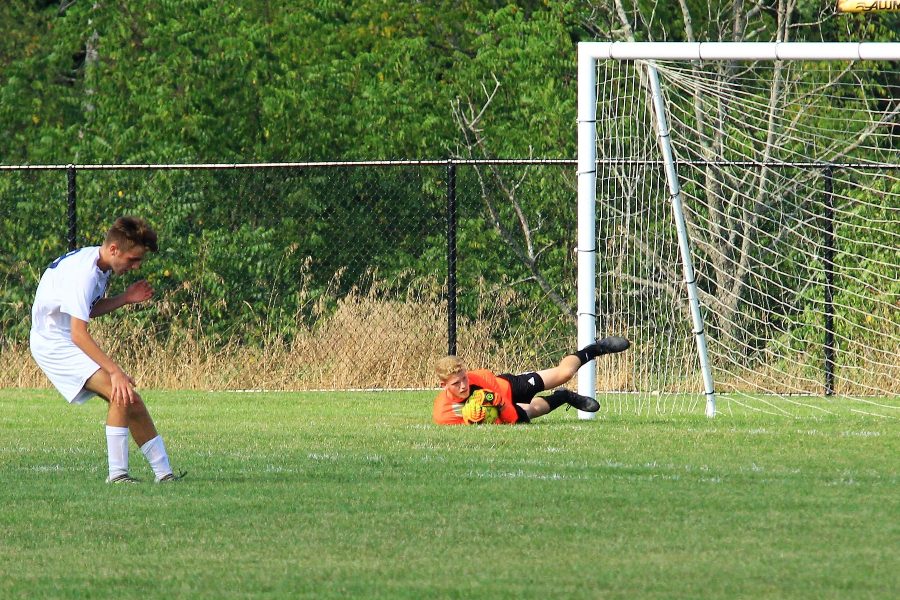 Alex Roberts came up with tough stops against Clearfield, but a pair of late penalty kicks for the Bisons sent Tyrone to its first loss.

After starting the season off with a victory against Philipsburg-Osceola, the Tyrone/Bellwood-Antis co-op soccer team suffered a heartbreaking comeback loss against Mountain League Opponent Clearfield yesterday at home, falling 3-2.

“I thought we under-performed,” said co-op coach Alex Bartlett. “We’re a good team, but we couldn’t get it done today. We will break down the performance and move on from here.”

The score at the half-way mark was 00-0, and the game was shaping up to be a low-scoring defensive matchup.

The Eagles came out firing in the second half, taking a 2-0 lead after an assisted goal by B-A senior Corey Johnston, and then a goal by B-A Junior Alex Taylor.

It was in the hands of the Tyrone defense, until Clearfield tied the game up on two penalty kicks, both of which came off penalties that were committed  by B-A senior Corbin Nale.

“It was very tough,” said Nale. “We need to get our stuff together.”

Clearfield then came up with a clutch game-winning goal in the final minute of a nail-biter, to even the Golden Eagles’ record at 1-1.

It’s only the first week of the seaon, so Coach Bartlett isn’t ready to hit the panic button just yet.

“I would rather drop a game now than deep in the season,” he said. “I’m thankful for this game because it was an adverse situation and we had to react.”