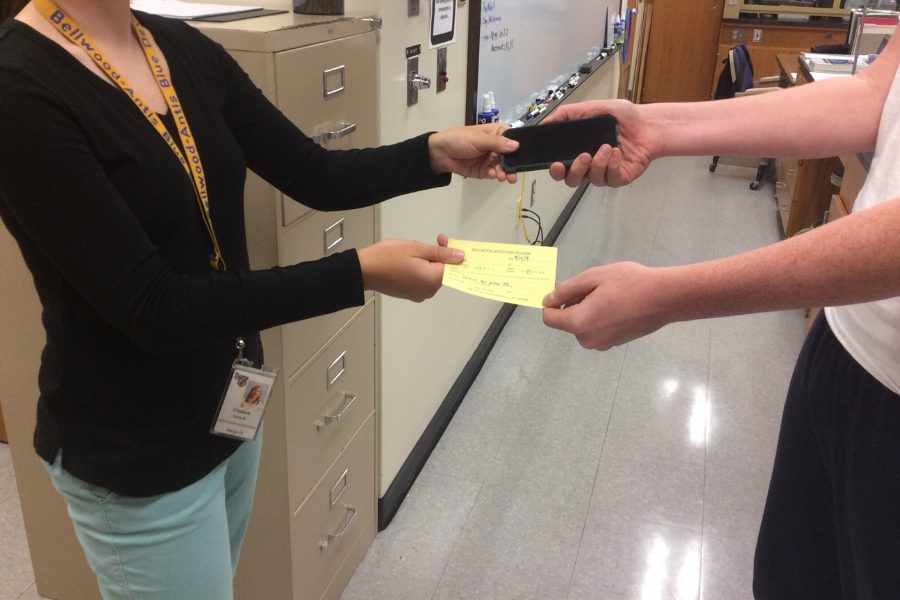 The new cell phone p[policy at B-A has resulted in several violations and punishments within the first week of school.

Here me out. This past summer, we all got the paper saying what new school rules were. Back then, I, like many of you, was frustrated. However, so far this school year, I’ve found myself to be more focused on school work, which was the whole point of changing the rule in the first place.

Even if you don’t want to admit it, I can guarantee that if your phone is in your locker and not on you like it’s supposed to be, then you’re more focused, too.

Maybe at the end of the school year, your parents will even see some academic improvements.

The reason I’m writing this now and not at the beginning of the school year is because I’ve gotten some perspective and I strongly urge those of you who haven’t, to get some too.

Many students are angered because they feel that teachers didn’t hold students accountable for the phone rule that was in place last year. They believe that that is the reason for the new, stricter rule.

I get that. And I did agree with that, it was my initial, defensive argument. However, we are in high school and we are responsible for our own decisions. And this is even coming from a girl that probably could’ve done better in her World Cultures class last year if she wasn’t always playing Hay Day.

I’m not trying to sound like a suck up to this rule either. Even at home, I’ve been more focused on coming home and doing my homework before opening snapchats or turning on Netflix. However, it’s only the third week of school, so that might change. But the point is, I’ve been less dependent on my phone as a whole since the school year has started.

For those of you who aren’t in favor of the new phone rule and who haven’t had Mrs. Nyman yet, she shared a very scary fact to my health class. There is a “horn” that is forming at the top of teens necks. This physical change in the human body is said to be caused by looking down at cell phones. I can’t help but think of all the times I’ve looked around class and seen people looking down at a full 90 degree angle trying to sneak their phones. This “horn” isn’t just something that Mrs. Nyman said to make us scared to sneak our phones underneath our desks, it’s something that scientists have observed.

So the next time Mr. Schreier or Ms. Clippard takes your phone away and says “You can get it back at the end of the day,” instead of getting angry at them for YOU being in the wrong…. do two things: 1. take accountability and 2. maybe say thank you because they’re helping your education.