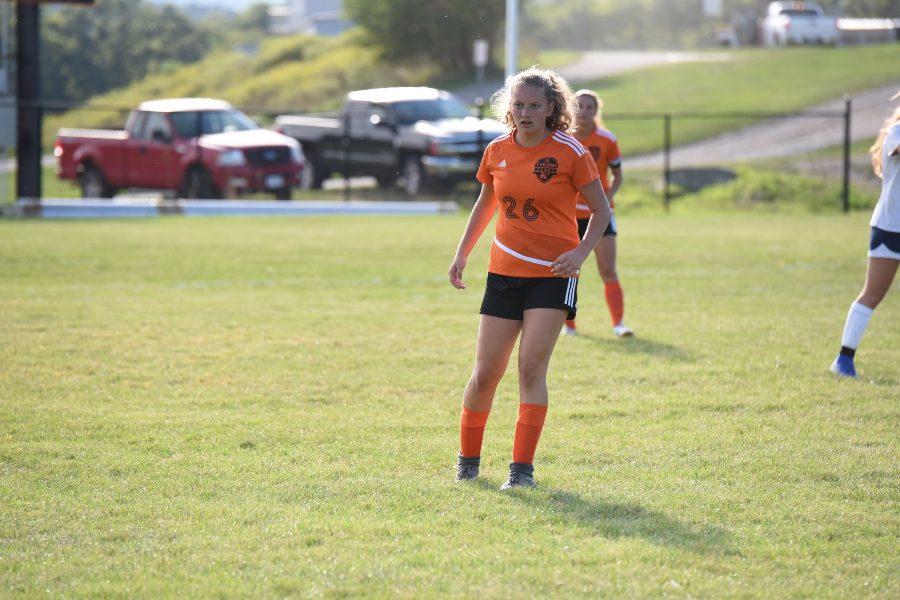 Jaylee Shuke looks to make a play for the soccer team.

The Lady Blue Devils volleyball team got off to a hot start last night, winning the first set for the second straight game.

Just like their face-off against Everett on Monday night, the Lady Blue Devils were not able to build on that  hot start, and lost their third straight game.

The Lady Devils fell to the Lady Bulldogs 3 sets to 2.

In all three matches, the Lady Blue Devils won either the first, or second set, but it’s been a real struggle closing out games for B-A.

“Sakeria, Sydney and Karlie played above and beyond and had a great night last night. It was a game we could have won,” said senior Bella Kies.

The Lady Blue Devils volleyball team have now fallen to a 1-3 record, and their hopes of winning the ICC are seriously starting to dwindle.
Girls soccer loses to BEA
The Bellwood/Tyrone co-op ladies soccer team came into their match last night with a 2-4 record, and faced off against undefeated Mountain League opponent Bald Eagle Area.

BEA came out firing and took a huge 4-0 lead, which seemingly put away the Lady Golden Eagles.

The Golden Eagles were able to put in a late goal to get one in the score column.

Their record is now 2-5, and a young soccer team looks to get back in the win column.