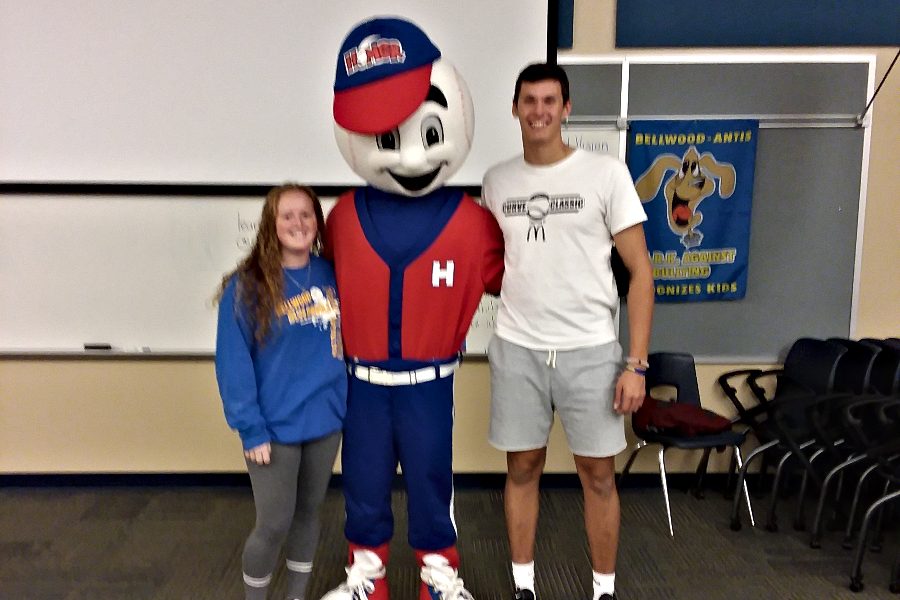 Travis Luensmann and Haley Schmidt pose for a picture with Homer for Red Ribbon Week.

Two weeks ago, Myers Elementary were celebrated for their good behavior with an assembly which coincided with the ending of the 2019 Red Ribbon Week.

This movement began in 1985 after the murder of Enrique Kiki Camarena, a DEA agent who worked undercover for Mexico for a number of years. His work led to the discovery of a multi-million dollar narcotics manufacturing enterprise in Chihuahua, Mexico. Upon the discovery, Kiki and his pilot were tracked down and murdered, sparking citizens in Kiki’s hometown of Calexico, California to raise awareness against alcohol, drug and violence. Calexico used red ribbons to symbolize their cause, and as a tribute to Kiki.

Today, as it is recognized, Red Ribbon Week is the nations largest and longest-running drug awareness and program.

At the beginning of week, students in second grade took part in a friendly discussion led by Blair County DEA spokesperson Sandy Smith. Smith also took time to print each of the students their own personal book, starring baseball mascot, Homer. Along with Smith speaking on the topic, she also requested that two high school  students  speak to Myers students.

The students selected were seniors Travis Luensmann and Haley Schmidt. Both students have taken similar paths in their high school careers with baseball and softball, sacrificing much of their summers to play against other players across the country to better their skills and showcase their talents to colleges.

“It’s an amazing and cool experience to have been able to talk to the kids. I remember when I was in their shoes, and it’s eye-opening to see how far I’ve come,” said Travis.

Haley commented on her time by saying, “Time with Sandy, as well as time Travis has spent with the youngsters, has definitely made an impacting foctor in saying no to drugs and alcohol. And just as Homer says: ‘Be a slugger, hit a homer in against drugs.’