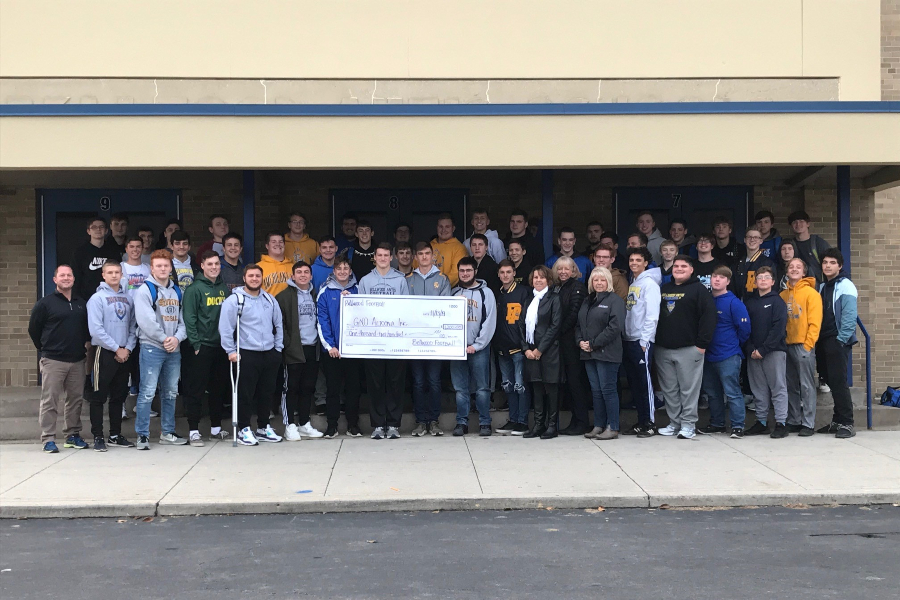 The Bellwood-Antis football team raised $1,200 to donate to Girls Night Out, a local group raising money for Breast Cancer.

When you turn on your TV to watch NFL football on any given Sunday in the month of October, you’ll see stars like Odell Beckham Jr or Tom Brady sporting their pink cleats, gloves, and towels in support of Breast Cancer Awareness.

For the Bellwood-Antis football team, they have a different, and unique way of showing their support.

Instead of going to Dicks, or Dunhams to purchase the pink gear, the players are asked to simply give a hard-cash donation of five dollars to be put together, and donated to  Girls Night Out, a non-profit organization located in Altoona that is devoted to raising money for breast cancer.

The Bellwood-Antis football team’s donation was matched dollar for dollar by the BA Quarterback Club, and the combined total was a donation of $1,200, which was 200 dollars more than last year.

“Everyone of us has special women in our lives that this could help, so that is why we think it is important to support the Girls’ Night Out group in their breast cancer awareness program,” said B-A head coach Nick Lovrich.

It was the second year B-A has worked with Girls Night Out, which held the largest breast cancer awareness fundraiser in Blair County history late in October.

“I am very proud of our guys for contributing to such a good cause,” said Coach Lovrich.  “The money raised stays in Blair County so that makes in an even better cause to donate to.”