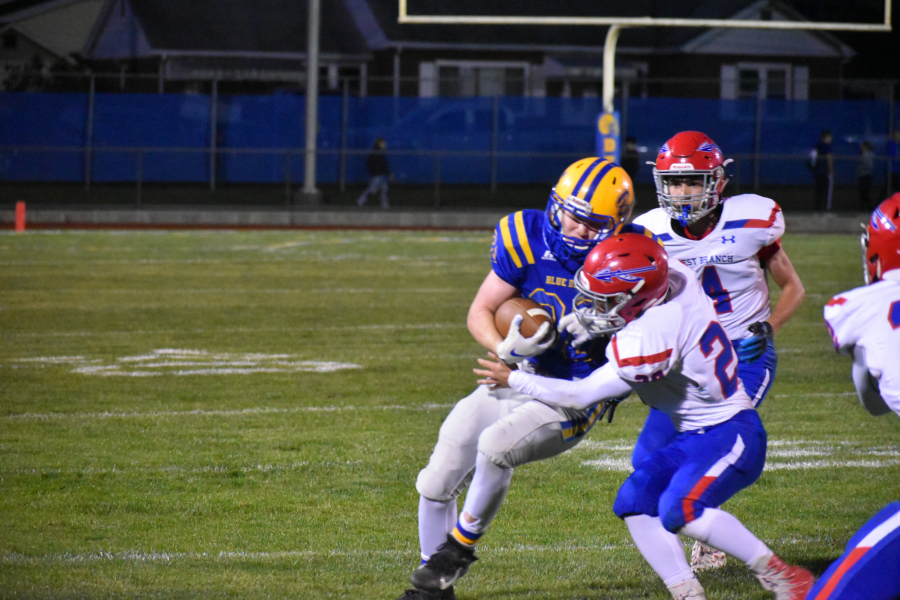 Nick Plank and B-A's powerful running game will be put to the test in the District 6 2A semifinals against Ligonier Valley.

Ligonier Valley is an opponent that Bellwood knows all too well, and it goes back to last year, where the Rams put the Blue Devil’s season to an end after a strong 34-7 victory in the district 6 2A semifinal at Point Stadium in Johnstown.

Now, the stage has been reset, and the rematch is on for Saturday night. No. 1 Ligonier Valley is coming off of a 49-7 stomping defeat over West Shamokin, while the No. 3 Devils used a fourth-quarter touchdown and a late takeaway to cement a comeback win over Cambria Heights.

The game will be played at 7 p.m. in Ligonier.

“At this point in the season everyone is a good team. We have to be prepared for what they do, play with passion, focus, and intensity,”   said B-A coach Nick Lovrich.  “This game is going to be packed with season-perfected plays, players pushing themselves to the limits, and teams looking to prove their dominance in order to advance to the championship.”

Senior Sam Sheeder led the Rams in their air against West Shamokin with 172 yards on 14-of-20 attempts. On the ground, sophomore Nick Beitel carried for 107 yards on 16 carries.

Ligonier Valley has been nothing short of a powerhouse on the season, charging to an undefeated record of 11-0, and the stats they are able to put up are unarguable. They are averaging 155.7 pass yards, and an astonishing 289.9 rush yards per game.

A defensive effort that has produced 20 sacks and 18 interceptions on the year is limiting opponents to fewer than 6 ponts per game.

For Bellwood, the Blue and Gold is coming off the 15-8 win over the Highlanders. Highlighted by senior quarterback Trevor Miller’s performancer, combining with Troy Walker and Zach Mallon, the Mighty Blue were able to finish the game and advance to the next round.

Miller passed for 155 yards on 6-of-12 attempts. Three of those balls went to senior Walker, who took those receptions for 72 yards. Similarly, Mallon took the other 3 catches for 83 yards.

Miller has had a strong season as a starter, throwing for almost 1,200 yards, but the Devils are a running team at their core. Mallon has run for 1,111 yards and Nick Plank 908, contributing to 2,813 yards on the ground.

B-A’s ability to rush the football will be put to the test against the stout Rams.

The animosity and hype for this matchup are already high, and is intensifying as Saturday night gets closer. Ligonier is looking for its fourth straight berth in the 2A championship. The Rams won the title in 2016 and 2017 before falling to Richland last season.