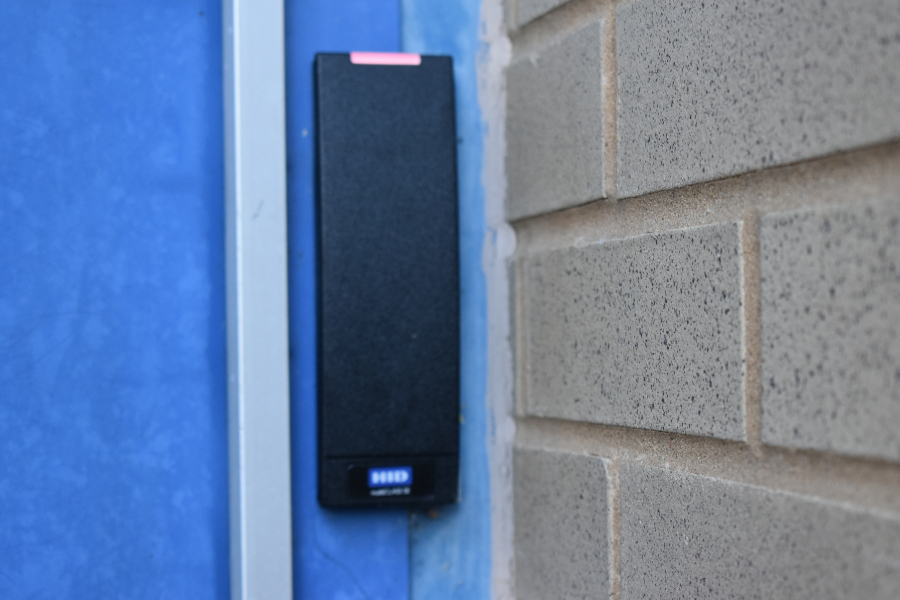 The black boxes on all BASD doors are part of a new locking system that has computerized door locks.

One morning a few years ago, a student from another school entered the building at Bellwood-Antis High School.  He had no malicious intent, and only wanted to give his girlfriend flowers, but it was a sign something was wrong with B-A’s security.

For Bellwood-Antis School District Superintendent Dr. Thomas McInroy this was, “the crowning blow that we have to do something now.”

Little did anyone know that this would point out weak spots in school security that would lead to a slew of safety changes that include the new locks and fobs for all doors that have been installed this year.

Dr. McInroy often says, the safety of students and teachers is a top priority for the district, so a stranger walking into the building without school officials knowing “showed that something needed to be done with the doors.”

Since the beginning of his employment as BASD superintendent in 2016, Dr.McInroy has been looking for a way to spend a grant that would improve school safety.  He wrote the grant that secured the school about $620,000 to spend for safety necessities. The doors were a problem, he said, throughout the district.

In addition to the incident involving the flowers,  there were other problems that pointed to the school doors needing correction.  At Myers Elementary School, kindergarten rooms have two doors: one to main hallway and the other to the KinderStation.  This means that in the event of a lockdown situation,  teachers have to calm down 5-year olds, lock the hallway door, and lock the KinderStation door.

To the administration, that’s  a lot of room for error. The solution, Dr. McInroy said, is doors that automatically lock when an emergency takes place, thanks to a new electronic locking system installed this year.

Dr. McInroy said the new door locks are to be an added part to the district’s new seamless integrated safety program.  This system aims at allowing for such things as a school-wide shutdown with the press of a button through a new app called Navigate.  The software would communicate with the doors to allow for a lockdown almost instantaneously.

Part of the system involves new fobs for teachers to scan in and out of the building.

The new door locks will not be activated district-wide for a few more weeks, and once they are teachers will have to be trained on this new order.

School security officer Tim Mercer said that he has been impressed with the security upgrades the district is completing.  He explained that there are many benefits to the new fob system, including that certain doors will have restriction and allow access only to certain personnel.

Officer Mercer said he understands that it may seem chaotic now learning this new system; however, he believes that looking back this will be a wise move.

“I think that we will all look back a year from now when we all look back, all the anxiety from the new fobing system will be gone,” stated Mercer.

Fobs will now be able to deactivated electronically, which guarantees people who leave the district no longer have access to the building.

An additional $33,000 is needed to complete the  safety measures for all exterior doors. However, a grant is being written so that this new system and other safety upgrades come at no cost to the taxpayers, said Dr. McInroy.

Other upgrades that the school has made to improve school safety have included a new fire alarm system and internet access points outside of the buildings so that teachers can communicate via iPad in emergency situations.