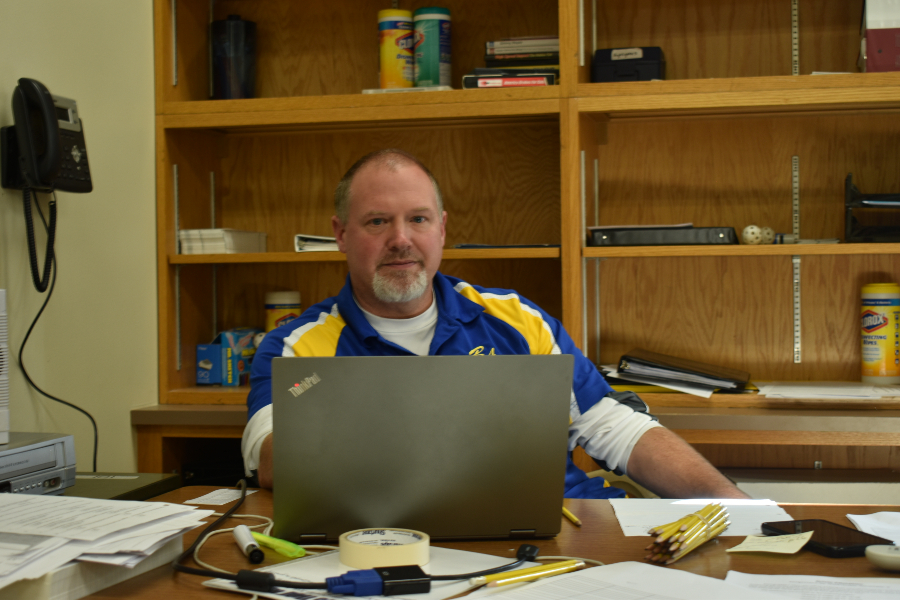 Mr. Burch has one year and five sports seasons under his belt as the B-A athletic director.

Mr. Charlie Burch has been teaching at Bellwood-Antis High School for twenty four years, but just last year he became the athletic director, taking over for Mr.John Hayes after his retirement in 2018.

After a year on the job, Mr. Burch is settling into the new role.

”I enjoy every second of it,” he said. “I am much more comfortable in all the various aspects of the job.”

As the AD, Mr.Burch is in charge of guiding athletic programs in the right direction, hiring coaching staff, making and meeting the budget.

But that’s not all Mr. Burch does. He also coaches junior high  football and track.

It makes for a busy schedule, and every athletic director is busy this time of year, with the combination of boys and girls basketball and wrestling keeping him on his toes.

“The first weeks of November involve ICC scheduling for next season, and then a little break,” said Mr. Burch. “Right now, in December, I will be in the gym three to four days a week for basketball. (Winter sports season) keeps me there all winter.

A 1988 B-A graduate, Mr. Burch takes pride in his job and running the athletic department at Bellwood-Antis.

“Bellwood-Antis is such a fine school community, and student body. It was a career goal,” said Mr. Burch.