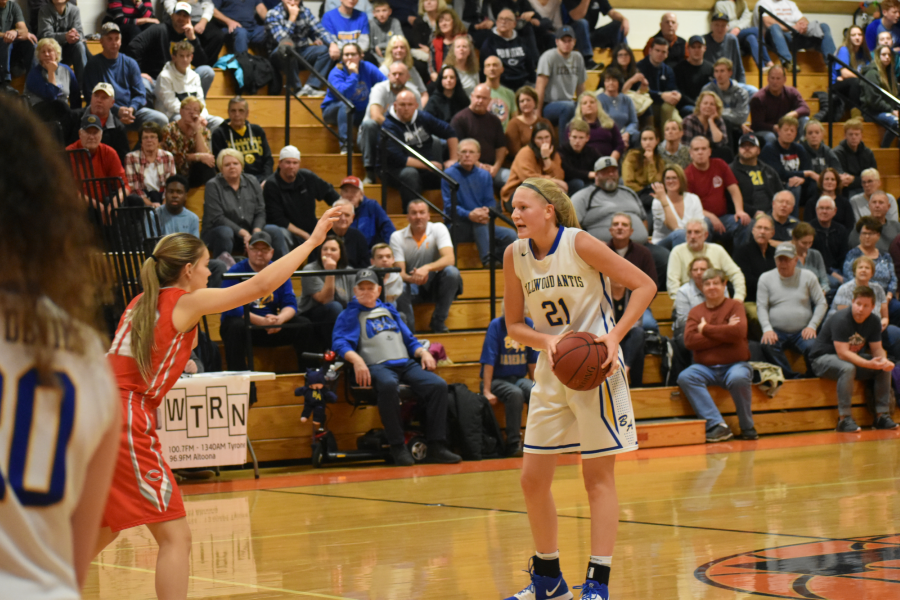 Alli Campbell sizes up her competition in the Reliance Bank Holiday Tournament championship against Tyrone.

Despite a test in the first round of the Reliance Bank Holiday Tournament over the Christmas break, the Bellwood-Antis Lady Blue Devils basketball team grabbed yet another first place finish and placed three starters on the all-tourney first team.

B-A point guard Alli Campbell was named the MVP, and Emilie Leidig and Sakeria Haralson were also placed on the tournament first team.

In the first round, B-A was closely tested by the Central Lady Dragons, but pulled out a nail-biter win by a score of 58-56. The undefeated Lady Devils were losing by two at half time.

Campbell scored 33, and no other Lady Devil reached double-figures.

In the championship, the story was completely different.

After a hard-fought victory in the first round, the Lady Blue Devils expected something similar from rival Tyrone, but that simply wasn’t the case.  B-A was led by Alli Campbell, who had a game-high 26 points to help cruise to 72-38 victory.

The Lady Eagles were held to only 14 points in the first half, and the Lady Blue Devils showed no let up all game.

Along with Campbell, Haralson netted 15 and Leidig 12.

For the back-to-back defending state champions, this tournament showed two things.  The grind, and heart that it takes to pull out a tough win through adversity, and also the ability to come out firing and blow teams out of the water.

The Lady Blue Devils improved to 7-0 on the season, and with the upcoming ICC schedule, B-A hopes to keep the train rolling.