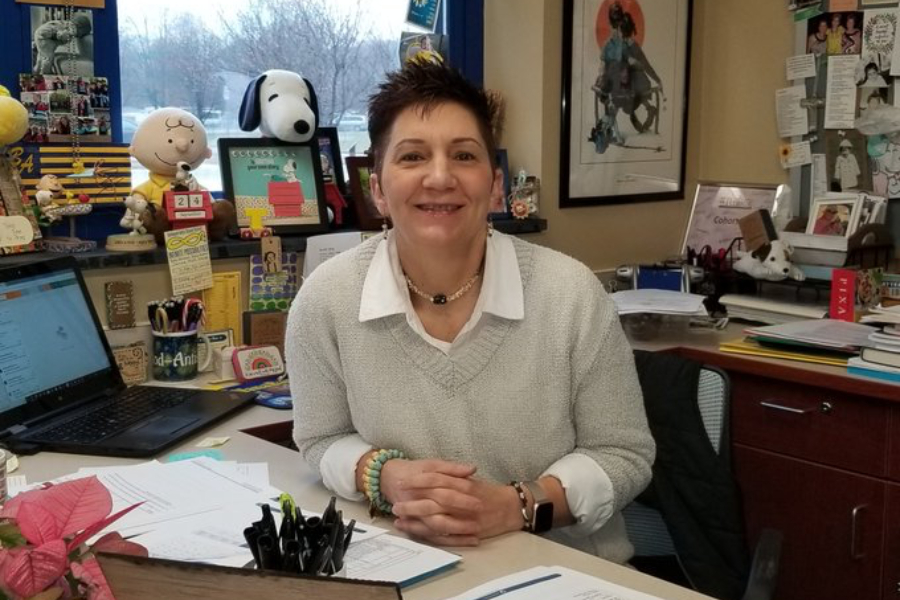 Dr. Terri Harpster will retire after this school year after 18 years as the principal at Myers Elementary.

Dr. Terri Harpster, the Myers Elementary School Principal, announced in December her plans to retire at the end of the 2019-2020 academic year.

She informed her staff on December 17.

Superintendent Dr. Tom McInroy could not believe the news when Dr. Harpster shared her plans with him.

“I was shocked,” he said.  “Dr. Harpster is hardworking and a progressive leader in education.  The thought of her retirement was unimaginable.  It took a few seconds to process her statement.  We talked for a while about the future and what it would hold for her and also the school.”

Dr. Harpster has been a part of Bellwood-Antis since her days as a student.  In her retirement announcement, Dr. Harpster shared memories of the school, from falling asleep on the bus and missing her stop, to sneaking a kiss in a closet  or setting a Brownie cap on fire.

Dr. Harpster said she remembers not liking school; however, she did like sports.

A year after her graduation in 1980,, she was hired as the junior high and varsity girls basketball coach.  Dr. Harpster always loved the sport of basketball and was the head coach of the 1990 team that played in the state championship.  These positions taught her valuable skills such as leadership and teaching skills, she said.

Teaching was never on Dr. Harpster’s radar because she didn’t like school, but Mike Sakash, the high school principal at the time, watched Dr. Harpster while coaching. He told her that she should consider teaching.  This later led to her becoming an educator.

“This speaks to the point of people believing in you,” stated Dr. Harpster, “and that if you have something to say, positive of course, you should say it.”

She went on to teach at Myers  until moving up to the role of principal.

Now after eighteen years of being principal, Dr. Harpster feels it is time to move on.

Multiple factors played key parts in the announcement being before the holidays. Dr. Harpster shared that she did not want people to hear it second hand and that plans are already underway for the 2020-2021 school year.  She felt that not letting people know she had this news was being dishonest in a way.

The remarks she read to her staff were written in the third person because Dr. Harpster believed this would be less emotional on her and would allow for insight into her life that her staff might not known.  The remarks told of Dr. Harpster’s 52 years of walking through the doors of Bellwood-Antis School District.

Since the fall, Dr. Harpster has known of her plans to retire.

“I feel it from God and within,” shared Dr. Harpster on why she is choosing to retire.

For a few years, the mundane, small aspects of the job were taking their toll.  Dr. Harpster said that she did not have the same level of enjoyment that she once had, and that this was unfair to both the students and staff.

“I am happy for her that she has made this decision.  However, I know that she will be hard to replace,” said Dr. McInroy.  “Dr. Harpster’s work ethic, compassion for students, and research-based progressive educational practices will be missed.  Most of all, I will miss her comradery.”

In retirement, Dr. Harpster is looking to possibly find new doors to walk through, either teaching on the college level or making a career in women’s ministry.

Although this is the close of Dr. Harpster’s years at Bellwood-Antis, she could not be more grateful.  She said she is thankful for the life opportunities that the school district and members have offered her.

“This is a fabulous school district,” she exclaimed.

We wish the best for Dr. Harpster, and know that her role at Bellwood will forever affect the dynamic of the elementary.  Thank you.