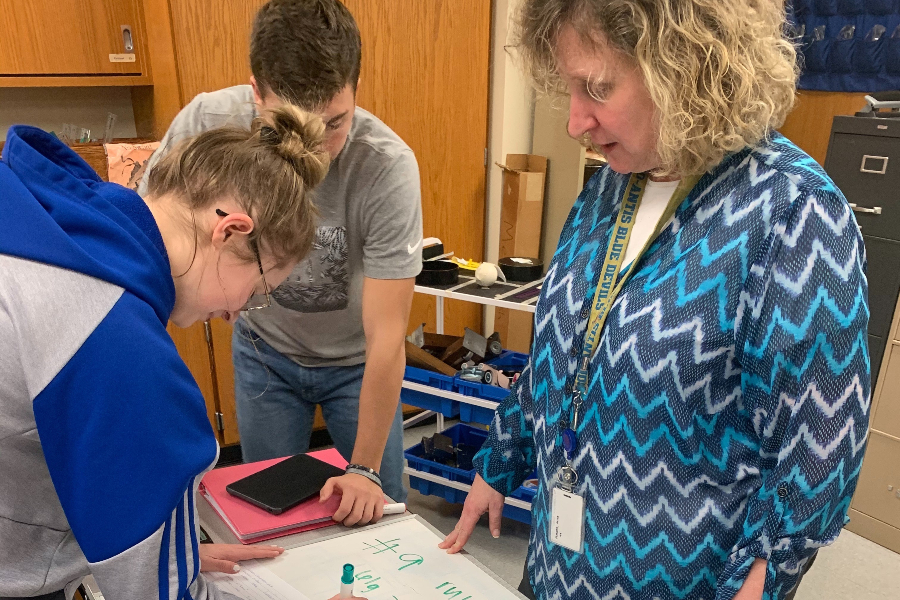 English teacher Mr. Kerry Naylor remembers how competitive it was to get a job at Bellwood-Antis fifteen years ago.  When he applied to teach at B-A in 2006 after teaching at Tyrone for nine years, he was one of more than fifty people applying for the position. That has changed.

Superintendent Dr. Thomas McEnroy said that there used to be about one hundred people applying for one position at some schools. Now, there are only ten to twenty applying for many spots, making it harder to find teachers for certain subjects including math and band.

It’s all a part of a national trend that has seen fewer and fewer people enter the teaching profession, and they’re avoiding it for a number of reasons.

Teachers  at B-A have witnessed the decrease in people becoming educators, and they believe there are many reasons.
PAY AND WORKLOAD
“When I first started here, there were a lot of substitutes in the sub poll,” fifth grade teacher Mrs. Ruda Burns said. “However, there are hardly any subs now.”

One of the reasons for the decline, she said, is an increase in teachers’ workloads.

Mr. Tim Trexler, who has worked in the district for more than twenty five years in various positions, stated, “I’ve noticed that fewer teachers are applying not just in our district but in a lot of area schools because it’s a never ending job, and the pay isn’t there.”

One poll showed that fifty-four percent of adults don’t want their children to become teachers, while half of teachers have considered quitting their job. Some say this because teachers don’t get paid enough or don’t receive adequate benefits; others say there are too many responsibilities but not enough time given to complete them.

Mr. Jerry Farkus, a seventh grade math teacher  at Bellwood-Antis, stated, “Too many demands are made of teachers. Teachers must have all students pass a state mandated test. And to be honest, the pay is insufficient to match the demands made of teachers.”

Pay is a prevalent theme, especially in light of the rising cost of a college education.

“I think fewer teachers are coming out of college because the cost of college is so high that not all teachers’ salaries can support paying back their student loans,” said Mrs. Susan Nycum, a middle school teacher at B-A.
STUDENTS PAY THE PRICE
The teacher shortage affects Bellwood-Antis in many ways; in fact, it directly affects the students in the district.

Beyond day-to-day instruction, there are no substitutes for some teachers’ absences; therefore, other teachers have to cover those classes.

“Class time has been lost due to lack of substitutes. Rather than spending time learning a subject or topic, classes are turned into a study hall,” said Mr. Farkus.
MOTIVATION
If teachers are becoming less interested and fewer teachers are applying, then why did America’s current crop of teachers become educators in the first place?  Some  say that they wanted to become teachers because of their love the kids and desire to have a positive impact on their lives. However, some teachers chose this job for the content area, and they really enjoy teaching their subject matter.

“My own kids entered the teaching profession because they like to work with young people,” said eleventh grade English teacher Mrs. Carol Bartlett. “They enjoy the idea that they may be making a difference in children’s lives.”

Physics teacher Mrs. Alice Flarend said that she is an untested area, so she doesn’t have to deal with the insanity and stakes of Keystone or PSSA testing.

“I worry little about the small stuff and focus on the big content ideas that I hope my students will carry with them past my class,” she said.

Although teaching has been a very promising career with many rewarding benefits in the past, it seems times have changed. Many teachers at Bellwood-Antis claim that if they would do it all over again, they would not choose this occupation. Reasons included the profession growing more difficult because of the lack of respect from the students, government regulations, the overwhelming workload, and salaries simply not meeting these demands.

“Educators are tired of fighting the fight. It gets old, and it’s a never ending grind,” Dr. McInroy said.

Fewer people are becoming educators, he said, because there are better-paying jobs out there.

“We spend $10,000 per student, while the southern states spend about $25,000 per student,” said Dr.Tom.
SOLUTIONS
Finding future educators is going to be a challenge, so how could the shortage be reversed or at least improved?

The answers to this very serious epidemic will not be easy to produce.  However, one thing appears to be clear: if all stakeholders involved in education can work together and assist each other during these difficult times, then maybe  seasoned educators will be rejuvenated and our high school graduates would once again enter one of the most rewarding career fields—EDUCATION!

“People in the teaching field that enjoy the profession need to work on recruiting new, young people,” said high school math teacher Mrs. Dawn Frank. “I love my job most days, but I see it not only as a job but as an integral part of my life. I want the school, my coworkers, and my students to thrive. If it is just a job for a paycheck, new teachers will not stay.  It has to mean more, and I believe for many that is intrinsic.”