The City in the Clearing 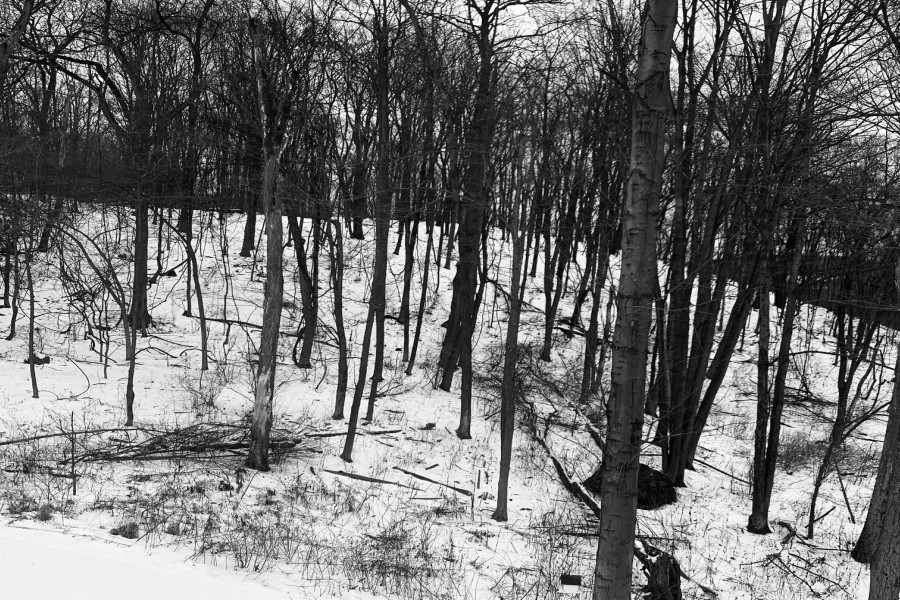 Out in the middle of nowhere, built in a clearing within a thick forest, stood the mighty city of Dema in all its glory. Dema was a simple city with hidden complexities, an architectural wonder to the human eye. Many residents—Demans—live in this place, and life is simple as simple could possibly be. Waking up, working, and making one’s way back home were the events that happened for most residents. Dema is separated into nine districts, each being overlooked by one of the nine Bishops who rule over the city. Out of these nine, Nico is the unofficial leader of the council. He is possibly the most feared, but the most effective at ruling. His incredible abilities to rule over the Demans come from his ability to teach Vialism, the religion that the Demans worship. Vialism worships no God or otherworldly being—it focuses on removing creativity from the mind, body, and soul. It was established by Nico, and he deemed creativity as being dangerous not only to a certain citizen, but to others, including the council. An outsider could say it is a way to control the citizens, but the Demans found it normal.

One practices Vialism by going by the day to day schedule put in place by the council and vowing to never take an approach to any ideas of their own. A Deman will worship this religion until the day they become Glorified, which is the last part to this religion. When one is very ill, of old age, or just unable to function in society, he/she will be taken by the Bishop of the district in which they reside in. From there, he/she is transported to the Tower of Silence, which is located in the center of Dema. Bishop meetings, Appointments, and Glorifications happen within the tower. When one is Glorified, a Bishop conducts a small Ceremony. At the end of the Ceremony, his/her body is as still as a plank of wood. After this occurrence takes place, the body is placed into a room with an open window. The window allows vultures to enter the room and remove all the flesh from the bones, preparing the body for the Vial. Nico would take the bones and infuse them into a small vial of pure red neon afterwards. These vials are then infused into the enormous walls, and there they will stay. An annual assembly of the Glorified is held to remember those people who were Glorified. If one chooses to defy or refuse to worship the religion, an appointment will be issued. Nobody knows what happens during an Appointment; it is most likely deemed as dangerous by Nico to have knowledge of such things involving one. Some exit with a cleansed soul, but this is not the case for all who exit. Some need multiple, and if one completely refuses to follow Vialism, they will have an early Glorification. Unfortunately, most citizens with creative or busy minds usually follow this path, or just plain disappear into from society without a Glorification. They seem to merge with the air and get blown away by a heavy gust of wind, never to return again.

Tyler was not a very social person. He was unusually quiet for the average Deman, but he was calm and collected. He had a few close friends, and all would say that he is very kind and somewhat interesting. But, there was something wrong with Tyler. His mind was constantly full of thoughts, the gears grinding when it came to problem solving. He—although reluctantly—followed the day to day schedule that all Demans follow in order to hopefully escape the chances of getting an Appointment assigned. Night after night, he was constantly tortured by his creative thoughts and he started to realize just how uneventful his days were; he called it a curse to live in this city. After work, he could be spotted walking among the streets of Dema wearing his faded, emerald colored camo jacket he always wore. His mind would go crazy here, so much that it scared him—he thought he would do something that would earn him an Appointment. The constant hiding from the Bishops was causing his colors to slowly fade. The brown in his short hair and sculpted eyes was beginning to turn from vibrant to dull along with his lightly-tanned skin, which was fading into a pale white. Dark circles were beginning to form underneath his eyes, showing the consequences of Demans with a mind like his.

It was late at night at the time, and all was silent besides the quiet whistling sound of a small gusts that snuck their way in over the top of Dema’s towering walls. The walls were absolutely humongous, specifically built to both hold the citizens inside and make climbing them nearly impossible for anybody that would decide to escape. Dema did not have many colors, the scheme involving many shades of grey along the buildings and streets and accents of red every so often. Even though Dema’s walls were being filled with small red vials of neon, the light being emitted was not bright at all; they did not light up the streets whatsoever. The atmosphere was extremely gloomy at night, and anybody who had the guts to even step outside would be deemed as absolutely crazy. At night, the city was dark, and nothing could be heard besides gusts of wind. The streets appeared twice as dark as well, especially if clouds would decide to pass through and cast a large black shadow over everything in sight. No lights could be seen besides the dull white lights of the street lamps that scarcely decorated the sidewalks, casting just barely enough light. The windows in the buildings were also still and silent, the color of the windows being black as night. This night in particular was a still one, and for one certain Deman, it was the perfect night to escape.

Tyler heard many tales about the so-called Banditos, and how they resided outside of Dema’s walls. They were a sort of small family, free to be as creative as they wished. He loved the idea, regardless of whether it was real or not. While walking along the edge of his district one day, he swore he saw one in all its yellow-streaked glory. Tonight, he decided, he would venture out at the dead of night and search for any unusual appearances in the walls that would signal an escape route. “It’s time…”  he whispered to himself as he opened the door that connected his cramped apartment to the outside. He was greeted by an eerie, uncomfortable silence and empty streets—nobody was outside. He stepped outside and shivered slightly; it was unusually cold at this time. Tyler reluctantly started to walk along the quiet sidewalks, chills slowly walking down his spine as he realized how silent it was outside. His footsteps echoed amongst the quiet streets as he walked, the sound seeming to travel for miles. A gust of wind seemingly roared its way towards Tyler’s ears, and so he jumped at the sound, walking faster. He was deeply regretting his decision to try and find a way to escape now, his heartbeat quickening when a terrifying thought entered his mind: the risk of getting caught by Nico. He shook his head and walked faster, his legs starting to tremble a small bit. His thoughts were soon proven to be true; the sound of heavy clip-clops starting to metaphorically drown his eardrums. It was Nico, and he was storming straight towards Tyler. His long red cloak was flowing as his horse ran in strides towards him, his expression seeming as calm as ever. Tyler suddenly felt dizzy, and before he knew it, his vision began to darken as he fell forward; although, he never felt the impact of his body hitting the floor.

Tyler awoke soon enough, but now he was inside a dark grey room, bound to a chair with ropes around his wrists and ankles. “W-Where am I?” He stammered out, trying to free himself from his restraints. “Your first Appointment, Tyler.” A gravelly voice replied from behind him, the voice belonging to the same figure who was storming towards him earlier: Nico. Tyler’s eyes widened when Nico came into view, and he was not alone either. The other Bishops were alongside Nico, their hands clasped together as if they were silently praying. The Bishops surrounded Tyler as he began to struggle even more, desperately trying to break free. Nico held a hand up to signal for him to calm down, and so he obeyed, looking up at Nico’s figure. “Appointment number one of fifteen, Tyler. Do not worry…you should not feel any pain from this procedure.” Nico stated in a manner all too calm for Tyler to take in. Tyler wanted to speak, to protest against the council surrounding him, but his body denied the action. The room was silent for a few more seconds before Nico started to speak a chant in a foreign language, the other Bishops joining in seconds after. Tyler was confused by the action, not knowing why this was happening until he felt something stir inside of him. The more he listened to the unintelligible words, the more it affected him. The chant was getting increasingly louder, and Tyler’s mind was beginning to twist and turn, churning uncontrollably. His eyes screwed shut, a choked yelp escaping his mouth at the uncomfortable feeling. He wished he could drown the Bishops out, but he was unable to. The chant increased in volume by the second, the churning within his mind spreading throughout his body. He let out a scream, the feeling starting to become overbearing and almost painful. Nico lied, he thought, the twisting increasing. He strained against the ropes, his body convulsing uncontrollably in his seat.

Tyler could not stand it any more, and his vision began to darken again. Before he knew it, black engulfed his line of sight, and he passed out again. A few hours later, he woke up inside of his apartment. He was laying down on his bed, his mind numb from the events that happened earlier. He could not recall the memories though, the images merging together in a blur. Tyler sat up and groaned, holding his head in his hands as he tried to remember what had happened to him. A few seconds passed before he suddenly remembered Nico standing in front of him, a smirk stitched across his mouth as he spoke that haunting chant. Tyler’s stomach dropped as all the images became clear—the chanting, churning, and the straining being among the few. He shivered as he remembered the feelings he felt, wishing that he had never ventured out that night. His mind felt unusually empty now after the images of his Appointment fading away from focus. He looked down at the floor and nodded to himself, silently making a promise to himself at that very moment. “Never again…” he whispered, over and over again. He learned an important lesson, one that he would never forget and one that would haunt him until his Glorification. Never ever surrender to creative thoughts and feelings, for Nico will come and find you. Tyler smiled for the first time in a while, feeling happy for once. “Time to go to work.” He said to himself, opening the door to his apartment once more. The cycle that he was cursed to live was taking effect again, but this time, Tyler was just like everybody else now: brainwashed and oblivious to the obvious right in front of his eyes. He had no idea, but Nico was watching over him, chuckling to himself. “Another successful Appointment.” He said to himself, smiling as he overlooked all the mindless humans walking among the streets once more.