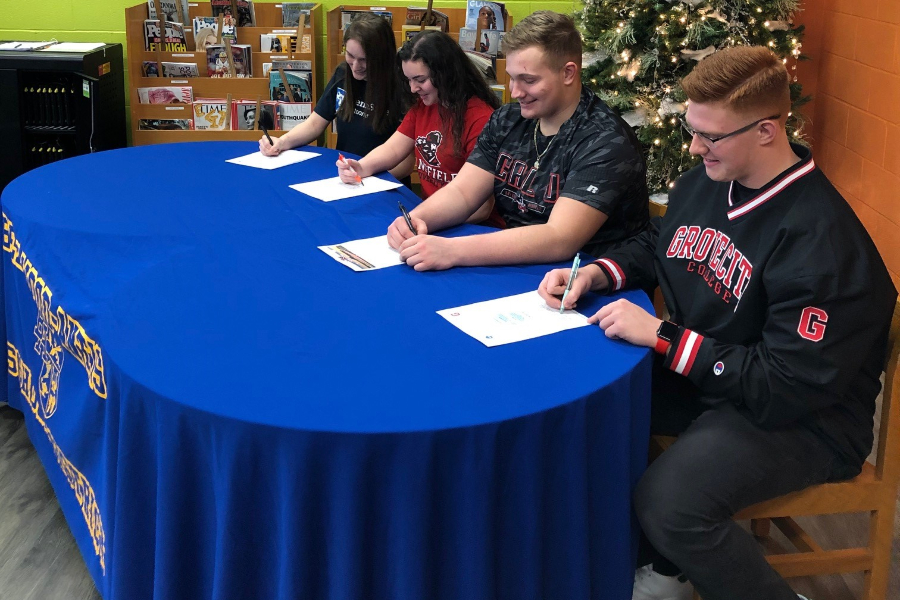 (From left to right) Fraith Patton, Emilie Leidig, Evan Pellegrine and Jackson Boyer each committed to play college sports next year at a signing ceremony on Wednesday.

Four more Bellwood athletes committed this week to take their athletic talents to the collegiate level.

Those four are among the many seniors at Bellwood who plan to play sports on the college level.

Emilie Leidig decided to go to Mansfield to play basketball. Emilie has been a standout player on the basketball team since her freshman year. This season Emilie reached a milestone of scoring 1,000 points in her career. For her career, she has scored a whopping 1,085 points in just 103 games.

“I chose Mansfield because as soon as I stepped onto the campus it felt right,” said Emilie. “I knew I could see myself playing there, and their pre-med program was one of the best in the area.”

Jackson Boyer  committed to play football at Grove City College next year. Jackson had a fantastic senior season with 48 tackles, 2 sacks, 1 forced fumble, and 1 fumble recovery. He is a very active writer for the Blueprint as well as a lawyer for the Mock Trial team.

Jackson said he chose Grove City because of its great academic program, and he plans to major in Finance.

Faith Patton committed to Penn State Altoona to further her academic and bowling career. Other than bowling, Faith has been a standout player for the varsity softball team, and she said that if she has the opportunity she will do both bowling and softball for the Nittany Lions. After taking up bowling as a seven-year old, Faith has hones her skills every year. She now has an average hovering around 200.

“Sports are fun and I am very competitive,” Faith said. “I chose to continue playing in college because of my love of the game.”

Faith said she was noticed by her college coaches last year after receiving a Bowler of the Year award.

Zach Pellegrine committed to play football at the University of California Pennsylvania. Evan was a dominant force during his senior season playing for Coach Lovrich’s Blue Devils. He had 74 tackles and 10 tackles for loss to go along with two sacks and two tumble recoveries.

“I chose Cal U because the  campus felt like home,” said Evan. “I loved the layout and how the dorm rooms are set up. The food is great and the football is top of the line. The coaching staff cares about the athletes and makes sure they are taken care of.”