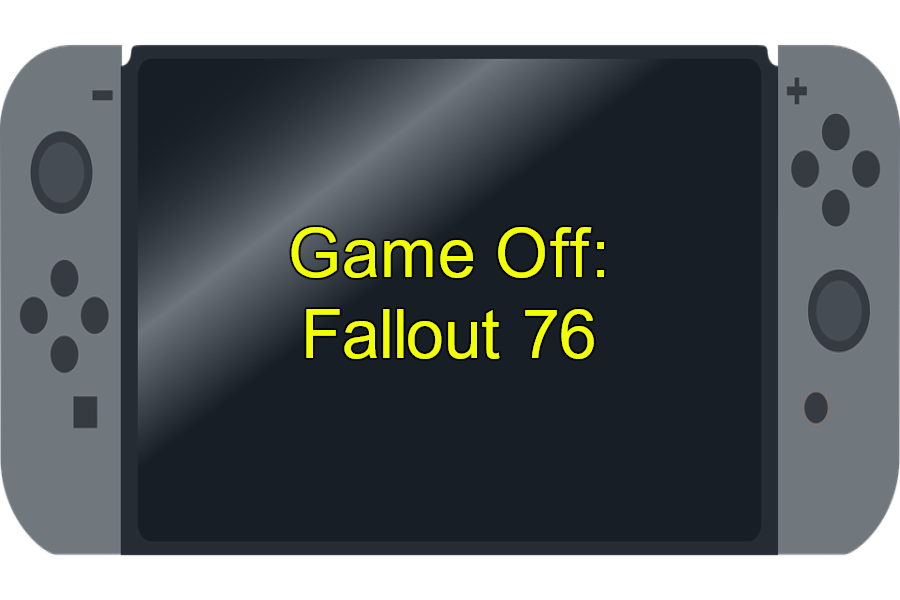 So far, in this video game review area of a school website, I’ve mostly reviewed masterpieces and pretty good games all around, so let’s talk trash

Fallout 76 was a hot piece of garbage, now that it’s out of the way, let’s talk about why this game failed to meet people’s expectations. Todd Howard, arguably the face of Bethesda, came out at E3 2018 and whispered his sweet nothings into the ears of people excited for a Fallout game, talking about the experiences of Fallout and how they are the best moments of their Fallout games. So they decided to release a Fallout multiplayer game, and I was ecstatic. I thought it would be so cool to have a coop Fallout game that has you traveling around with friends.

Then, the trailer happen, blasting Country Roads over the loudspeaker, people were excited, and then they announced that 32 people would play in one server, they announced a beta (play it early to test the game) and all of this great stuff that would be neat for any other game, just not Fallout.

To understand why this game is unliked, you have to know what made the other games so good, and instead of taking the obvious example of New Vegas, I’ll use Fallout 4 to explain what they did mostly right. Fallout 4 had scale, it had decent dialog, but most of all, it had character. And while the main story Isn’t great, the side quests are for the most part, intriguing. For example, you could help a band of american revolution esque robots launch their boat to the top of a skyscraper, and it was hilarious. In Fallout 76, there are no npc’s (Non-Playable Characters), only old tapes that tell you what to do. There are only player characters, who can’t attack each other because they have to start a duel.

I said in my New Vegas review that I like the bugs and glitches cause they make me laugh, and if you didn’t read that review, do it, it’s my favorite. But back to this, the glitches in this game aren’t funny, or even useful for speedrunners, they just don’t let you play the game. Constantly losing your items for no reason, falling through the floor, frame drops. None of it is fun, just really laughable because there are so many you have to question if they played their own game.

Now, for the small details that don’t deserve their own paragraph that are still a problem. Weapons and armor are level locked, which is the first and should be the last we see that. The story is for lack of better words, abysmal. The character creator literally didn’t work, I couldn’t see its face while making my atrocity to mankind. The game is made in the same engine as skyrim, which is not good.

The only time I had fun was when playing with friends, which you know what other games are fun with friends? Literally anything, either playing an intense horror game, or a complete disaster can always be fun with other people to share the pain with. But what does this game do right? There has to be something that hit the mark. The marketing, while marketing has no effect on game play, it does sell the game. Country roads was a big meme for a while, which helps to sell your game, the promises they failed were really interesting to hear, and honestly, that’s about it

So yeah, by this point of the review you should expect the game to have a low rating, and it is: 2/10. The only reason why it isn’t a one is because it is still a game put together, it may be held together by scotch tape, but it is still a game. Also, there is a Battle Royale Gamemode, so that’s something that I also hate. And, before I forget, there is a subscription service that lets you play private games, but just like the rest of the game, it doesn’t work, AND, because of course there is more, the subscription service is 100 dollars a year.