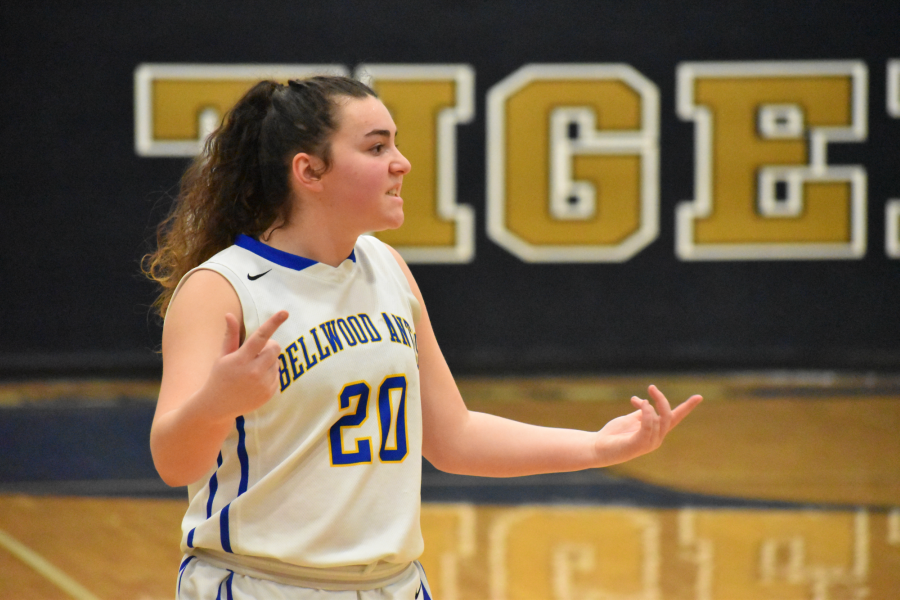 It was a frustrating night for Emilie Leidig and the Lady Blue Devils in the 2A semifinals against Bishop Guilfoyle.

The top seeded Lady Blue Devils, and reigning back-to-back PIAA champions, headed into their second round District 6 2A match-up against fourth seeded Lady marauders of Bishop Guilfoyle (BG) who came in with a record of 19-5, as the favorites in their classification.

Sometimes with great expectations comes great pressure, and it seems as though the pressure of the moment may have gotten to the Lady Blue Devils last night at Hollidaysburg Area Senior High School.

Alli Campbell clearly didn’t feel much pressure, converting on six threes and tallying a total of 40 points. The supporting cast for B-A, which has had an amazing season, had an underwhelming game. Second leading scorer Emilie Leidig had only 6 while Sakeria Haralson seemed stifled by the dominant BG defense, only scoring 2 points in the paint. Chelsea McCaulsky had 3.

Part of the problem for Leidig and Haralson was fouls as both players battled foul trouble and spent significant portions of the game on the bench. The Lady Marauders were hot early and opened a 9-0 lead and never trailed.

“BG played with a lot of effort the entire game. Much more than we showed,” said B-A coach Jim Swaney. “That was a big factor along with Sakeria and Emilie not playing for large portions of the game because of fouls.  We just cannot afford to lose those two for considerable minutes, they are too important to our offense and defensive game plans.”

For the Lady Marauders, sophomore Leah Homan poured in 27 points to lead the balanced BG offense, including 11 down the stretch to seal the victory.

The hopes of  a three-peat for the Lady Blue Devils are still possible, as they head onto the PIAA 2A state playoffs, despite the loss.

“The motivation should be about winning. How bad do we want every game from here to the end,” Swaney said.  “If we are fully engaged and playing with maximum effort we are the best team in the state. Play together and be a team, if we do that I like our chances playing anybody.”

B-A suffered only the second loss of the season, dropping to 23-2.

The next game for the Lady Blue Devils will be Thursday Against Bishop McCort in the District 6 consolation game as they hope to get the win for better seeding in the state playoffs.