Parents look for answers at heated board meeting 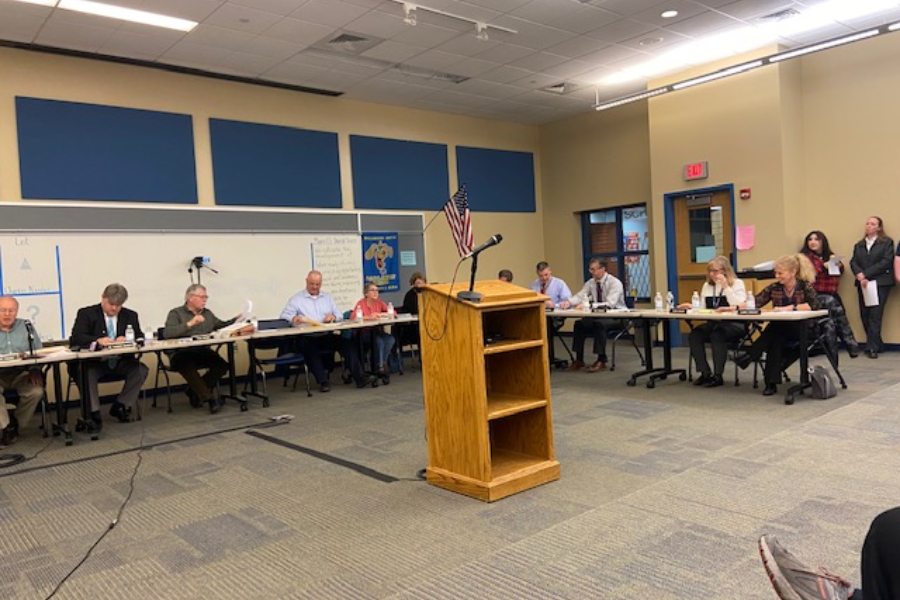 At last night's board meeting, parents and community members showed up for answers.

Parents and family members of Bellwood students questioned and expressed concerns regarding the sexual abuse allegations against Ryan Blazier last night at a board meeting at Myers Elementary.

Board members and administration faced the public and attempted to address their concerns, which included a petition for Superintendent Dr. Thomas McInroy to resign.

At issue is the District’s handling of allegations of sexual abuse by Blazier while he was the junior high wrestling coach. Several of the incidences of abuse are alleged to have taken place on school property.

District resident Rochelle Simpson opened up the public comment portion of the meeting by providing the board with a petition for Dr. McInroy to resign. The petition as of presentation had over 680 signatures. Simpson expressed that one of her biggest concerns was mandated reporting. She questioned what the corrective action was if someone failed to comply with it.

Dr. McInroy responded that everyone who is around youth is required to be a mandated reporter, but Simpson countered with an example from the Altoona Mirror, which published portions of the affidavit from the case, saying the janitor involved was interviewed by police and said he reported the incident to three school officials. However, he did not contact the Childline.

Dr. McIroy said. “The law is, the person who witnesses the event needs to report it immediately to Childline and then to report it to their supervisor.”

In his initial statements, Dr. McInroy touched on security and what the administration is doing to improve the safety of students at B-A. This included changes in coaching and volunteers, security such as cameras and new windows, as well as new protocol for Saturday morning detention.

Another big change Dr. McInroy mentioned was requirements of yearly review of Childline reporting requirements in addition to five-year training requirements at the beginning of each school year by all faculty and staff with continued confirmation that all new staff will meet these requirements and receive this training.

Perhaps most important, the District announced it hired Jocelyn Kramer as a special counsel to conduct an independent investigation of the District and its handling of the Blazier allegations. she is a partner from Weiss Burkart and Kramer LLC.

“Attorney Kramer will conduct an independent investigation regarding the school’s response to the abuse allegations and relating to safety and security matters,” said Dr. McInroy.

The district will also review and enhance the state mandated protocols for school employees who have been accused of child abuse including sexual abuse.

The janitor who is alleged to have witnessed the abuse in the wrestling room is still working for Bellwood-Antis, and Simpson argued that if he didn’t follow the corrective action, he should face the result.

Another speaker was Sheri Noonan, who is the president of the Bellwood Wrestling Booosters. She made as plea for the public not to turn its back on school programs in the face of the allegations.

Amy McClellan, a  survivor of sexual assault, brought up major sexual abuse statistics to everyone in the meeting and expressed her feelings of the situation.

“As a survivor of sexual assault, it doesn’t get better, everyday I live in fear, every single day I worry what will happen to my kids,” she said. “As an outspoken advocate, I would have to handle it myself, because I lost faith. I have lost faith, it can’t just be about the names anymore, and sweeping stuff under the rug. We have to get these children help.”

Joseph Neary, a veteran with a son who wrestled for Blazier, asked questions of security and what the district is doing moving forward.

“I expect full transparency from this point on,” he said.

There were plenty of emotions flying throughout the room last night. Parents and community members expressed anger, sadness, and their disappointment at the allegations against Blazier and how it was being handled.

A grandparent of one of the victims was there and broke down into tears asking, ” if that was one of your children or grandchildren, would you have him immediately removed.”

Also last night, an election was held  to replace Jason Lynn. Lynn was eliminated from the board in January, several weeks after he was arrested on weapons and drug charges. Tim Mallon was elected to take his place.

“I will do my best to serve with honor and integrity and to not let this wonderful community down,” said Tim Mallon on Facebook.