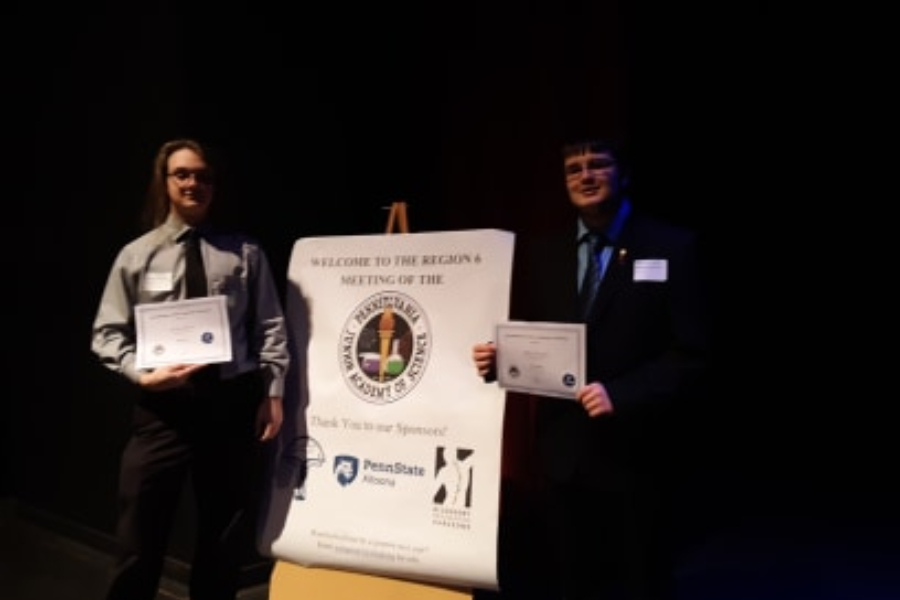 Zachary Merritts and Philip Chamberlin each earned first awards at PJAS and qualified for the state competition.

There is no doubt science isn’t for everyone, but two Bellwood seniors proved they have a talent in the STEM field.

Last Saturday, March 7th, 2020, Philip Chamberlin and Zach Merritts competed in the regional PJAS competition at Penn State Altoona. Both Philip and Zach won 1st place and will be moving onto the state competition held at Penn State University Park in May.

PJAS takes a lot of work and preparation, and PJAS advisor Ms. Denise Shimel is proud of the effort Philip and Zach put in.

“I am very pleased that these 2 students worked hard to prepare for the regional competition,” said Ms. Shimel. “I’m very proud of them.  I am especially proud of their own efforts because their projects were independently completed, apart from school, mostly on their own time.”

Physics teacher Dr. Alice Flarend was also a huge help in getting Philip and Zach a first prize.

Ms. Shimel said, “ I want to send a big ‘thank you’ to Ms. Flarend for all the help she gave both Philip and Zach because both students presented projects in the physics category at the regional competition. Since their projects were physics projects, she (Dr. Flarend) was the content area expert, but their projects were not part of their class curriculum yet built around their content knowledge.”

For Philip’s project, he tested the effects of humidity on the coasting velocity of an object.

“I built a container that water could be boiled into, which would thus increase the humidity within the container,” said Philip. “Theoretically, a car should go faster in these conditions due to water having a lower p value (basically density) than normal air. This leads to a smaller drag force to avoid impending motion.”

Philip was also awarded a $5000 scholarship through Penn State Altoona.

Zach was testing how terminal velocity is affected by how turbulent the water is.

Both Philip and Zach are looking forward to competing at states in May.

When asked how it felt to win 1st place at Regionals, Philip said, “It feels great! I am excited to compete at states.”