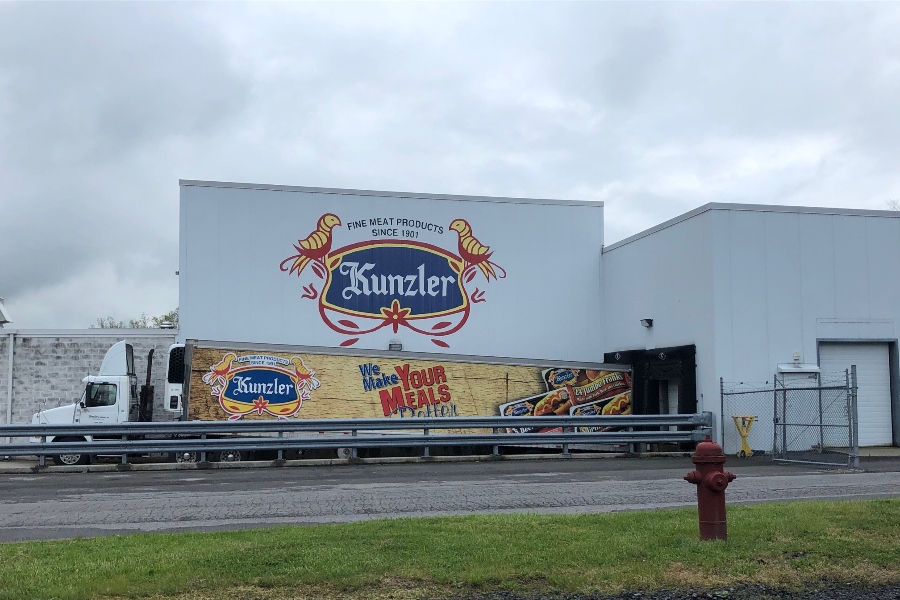 JB Kunzler in Tyrone is one area business that has worked to alleviate the effects of a meat shortage brought on by the COVID-19 pandemic.

The Coronavirus has been devastating to the economy in many ways,  but what effects has it had locally?  Exploring different industries will allow us to get a better understanding of the economic standing of Blair County.

Recently there were claims of the Altoona Area Wendy’s being out of meat.  While it seems like something that could never happen, but these are extraordinary times.

Nationally, there have been talks of low meat demand.  Animals are being euthanized to keep their populations under control.  Meat processing centers across the country have experienced the effects of COVID-19. With over 100 plants reporting over 4,000 cases, some workers  have decided to stay home for fear catching the virus.  Certain plants have had to halt production entirely.  Meat packing workers failing to show up clogs the meat industry’s pipelines, and breaking this link in the chain effects the packing plants and consumers further down the line.

Are there local ramifications being felt by this slow down?  Dave Grazier, Vice President/General Manager of JB Kunzler, said yes.

“Since those plants [Meat processing plants] in the Midwest have halted or slowed production because their workers are afraid of catching coronavirus, it has affected meat packing companies everywhere,” Grazier said.

Kunzlers is a meat packing plant in Tyrone. It takes in raw materials in the form of pork bellies from  processing plants and produces meat products we are familiar with, like bacon.  It then supplies both retail outlets like grocery stores, as well as larger customers, like cafeterias and restaurants.

Kunzler’s operates on a regular schedule that supplies its plant with around 17 tractor trailer loads of pork bellies weekly.  With the change in suppliers’ ability to meet demand, Kunzlers has had to pull from new suppliers.

“We have partnered with other suppliers, and they have really given us what we needed.  There has been a lot of teamwork,” stated Grazier.

It is astonishing to see the team effort that has gone into supplying America with meat and in general life activities.

At the beginning of the national shutdown there was a lot of panic buying, and Grazier shared that this affected Kunzler’s ability to operate normally.

Kunzler’s is a life-sustaining business who’s operation keeps Blair County fed.  Even with the necessity to operate, one should not fear the spread of COVID-19 from these plants.  Grazier said Kunzler’s has taken great strides in setting up safety guidelines.  Their factory is cleaned every night, workers when possible are kept six feet apart, and are equipped with masks and gloves. Where employees cannot be distanced at least six feet, Grazier said plastic barriers have been put in place between workers.

The last link in the meat supply chain before reaching customers are grocery stores and restaurants.

Grocers have been hit hard during this pandemic, and many people have been hoarding necessary supplies.  What effect has this had on the availability of meat?

Tim Miller, General Manager of Hometown Market, said that his store experienced panic buying of meat.  When the shutdown started, people were storing large quantities  to ensure that they have what is needed.  However, this trend has continued  despite stores being open and running as usual.  Miller shared that people are still buying more meat than they usually do, and this has affected their supply.

Additionally, Hometown has been experiencing “Hit and Miss” deliveries from their suppliers.  Different meat suppliers have been affected by COVID-19 and the effects have been felt at the local grocer level.  A reason for the lower supply is that grocery stores have pulled together to help each other maintain a reasonable meat supply.

With the in-store shortage, Hometown has limited customers to five packs of meat, Miller said.  This is to ensure that everyone gets what they need.

Local restaurants have also felt the effects of the meat shortage.  Ben Irvin, owner/proprietor of Irvin’s on Main, said that purchases for his restaurant have declined, and it is the result of a few different factors.  At the beginning of the pandemic, Irvin said that demand was low and this resulted in purchasing few packs of meat.

With demand returning to normal, he has been unable to get what he needs from his suppliers.  Irvin also said that  prices for meat have gone up substantially.  For example, Irvin’s used to purchase hamburgers for around $3.00/lb., but due to the shortage the price has now doubled to $6.01/lb.

The combination of low availability and high prices has contributed to restaurateur’s lack of purchasing.