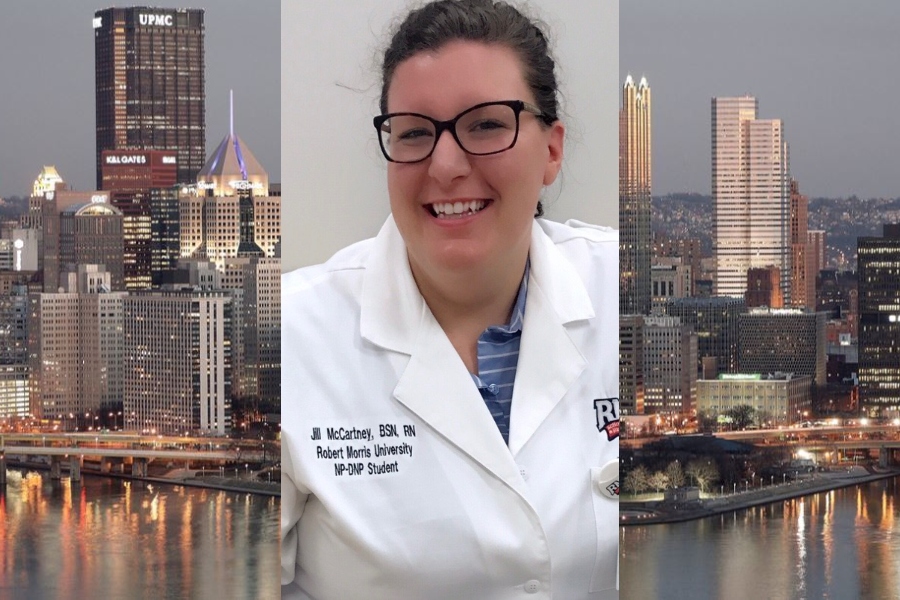 Jill McCartney has definitely been busy since graduating from Bellwood in 2007.

Ironically, Jill didn’t always want to be a nurse. In fact, after graduating she went to college thinking she wanted to be a teacher. She started teaching in undergraduate nursing programs during her graduate education, so in a way she did end up teaching.

When asked why she decided to be a nurse, Jill talked about a passion for the wonders of the human body and a desire to help others.

“I’ve always liked the sciences and I really like anatomy and physiology,” she said. “It was just very cool to learn how our bodies work. I also wanted to help people so nursing seemed to be the best of both worlds. And then I realized a lot of nursing is patient and family education about medications and disease processes.”

When Jill told her mom, who is also a nurse, that she thought she wanted to go into nursing, her mom gave her some good advice. She told Jill that if she wanted to become a nurse she needed to want to help people on their worst days, so her mom pushed her to become an EMT while she was finishing her science degree at Penn State. That way she could decide if caring for others was her thing. And caring for others has really become her calling in life.

Some of Jill’s challenges at work are that things are constantly changing, whether its technology, regulations, or even the condition of the patients. It keeps you on your toes and you have to adapt and be open to learning something new every shift.

Jill said she loves that even on the hardest or busiest days, she can feel like she has made a difference.

Jill has also been on a medical mission to Nicaragua.

“When I left for that trip to Nicaragua, I didn’t know what to expect. Our resources were limited but we were provided basic health screenings, physicals, and health teaching to a very low economical community,” Jill said. “I will say, it often felt like we were limited in the supplies we had or the medications we could give, but I learned a lot by just being compassionate to other people, especially when you don’t look the same or even speak the same language. I feel like I got so much out of that trip, even more so than I was able to give.”

Jill plans on continuing her career working in cardiology as a Nurse Practitioner.