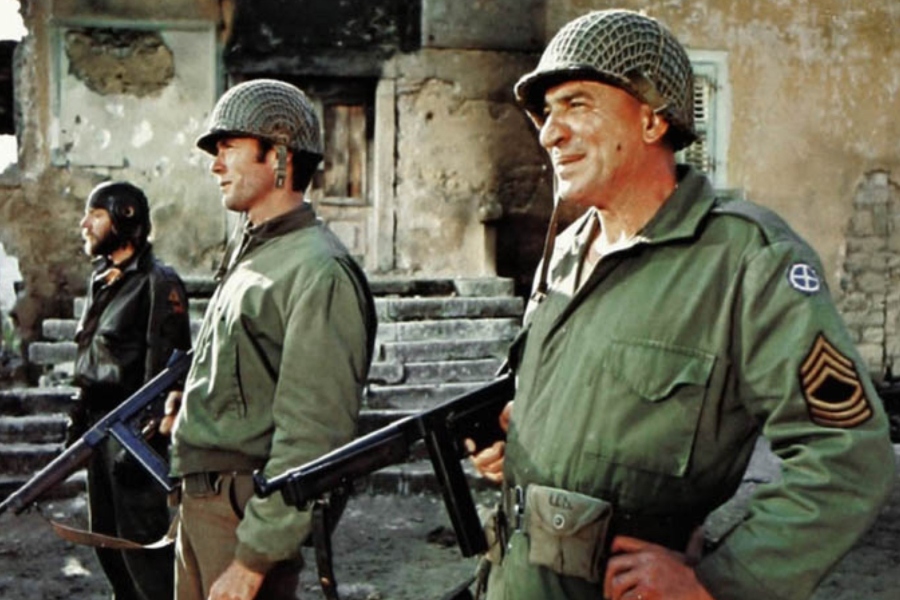 Kelly’s Heroes is one of those almost perfect movies, despite its lack of notoriety. I could watch it over and over again. This movie is a WWII comedy action flick starring none other than THE Clint Eastwood as Pvt. Kelly. Him being in this movie in it and of itself makes it worth seeing; however Kelly’s Heroes is actually a very unusual movie for Clint Eastwood to be in. The comedic aspect is something that most other movies starring this action star are lacking, but he manages to fit the role perfectly.

The rest of this all star cast includes Donald Sutherland as the 70s hippie tank commander, Sgt. Oddball, Don Rickles as the shifty underhanded black marketeer, SSgt. Crapgame, Telly Savalas as MSsgt. Big Joe, and Carroll O’Connor as the loud mouth over the top Maj. Gen. Colt. With this cast it really is a wonder why the movie is not more well known. The general premise of the film is that a group of GIs band together to rob a German bank housing 14,000 bars of gold that sits behind enemy lines. The movie tells this story with an amazing blend of excellent action scenes and tongue in cheek humor.

Kelly’s Heroes opens with the capture of a German officer who is interrogated with alcohol. This leads to the discovery of the gold. The group faces the Germans to the East and their own artillery hitting them from the west. German tanks pull down the road and the group is forced to retreat. During this action scene, as with the rest of the movie, there is one thing that separates this from other movies, that being the makers use accurate equipment. The Germans are using either real or realistic looking German tanks and the Americans have a variety of realistic equipment. It is very unusual that we should rely on a comedy to have proper equipment, but we do as most movies just gave American tanks a paint job and called them tigers. Instead Kelly’s Heroes uses actual heavily modified, and I mean heavily modified, T-34s as tiger tanks, the difference is negligible and when compared to other movies much preferable.

After the retreat the group is sent to the boring back country of France and start planning. We get introduced to Oddball and Crapgame. Of course they needed aerial reconnaissance, the generals photographs. He is not happy, but he does not know where they went. The tanks and the infantry push through the line separately. The infantry through a crossroads and the tanks through a railroad line and station. Of course the hippies need their music while in battle so they naturally only have one choice, and that is I’ve Been Working on the Railroad. Sadly the bridge is destroyed and they need a new one, all because, as Oddball put it, Moriarty was givin off those negative waves about that bridge. This is where the marching band comes in. What? They need people to build the bridge. During this time we have one of the only serious and sad moments in the movie. Three men are killed in a battle with some Germans. All of this is done with great action and humor. Oddball and Crapgame make for superb comic relief and as always the Clint is amazing. His acting leaves no wonder as to why he became so popular.

Oddball brings a long column of soldiers and non combatant military personnel to the group. Soon the general finds out that a group has broken through enemy lines. He doesn’t want to be interrupted while listening to the game. As they push forward the group is forced to leave behind men including grave registration and the general pushes to join the advancing penetration into enemy territory.

Soon the time closes in for the final battle. As Kelly and the gang finally reach their destination they need a plan to beat the tigers held up in the square. Moriarty is giving off yet more negative vibes, but as Oddball says thanks to Kelly’s waves they can’t lose. You know I did say he was a hippie. Everyone sneaks into town and they disable two of the Tiger tanks, but then disaster strikes. Oddball’s tank is put out of commission leaving only one option. Make a deal with the Germans to rob the bank together in a parody of a common scene in Clint’s spaghetti westerns.The mission is a success and now all they need do is spend their new found wealth. How, you might ask . Well for one Oddball buys the Tiger tank to replace his worthless Sherman. Now the only thing left is for the general to come in, liberate the town, and take complete credit. Well, that and insulting Charles de Gaul of course, because why not. Of course in true Clint Eastwood fashion they just have to ride off into the sunset.Now in these scenes as with all the others THE Clint makes for an amazing cool guy. The action is suspenseful and the comedy is spot on. Of course the main comedy here comes in with the celebrations and festivities.

Overall this movie is excellent and holds the place of being one of, if not my favorite movies of all time. The seamless blend of action and comedy are something few other movies have pulled off as well. The acting is amazing and all the characters have a great back and forth. Of course with the amount of stars they had there is no way the acting wouldn’t be good. The plot is interesting and involved and every action has a purpose, either to set up a joke or further the story. I truthfully have almost no complaint about the movie and could watch it over and over again. It is no wonder this movie has become a cult classic and is favorited by those who have seen it. If you have the time I would suggest watching it as it is totally worth it and believe me no description can to the masterpiece that is Kelly’s Heroes justice. Have a great week and I hope you enjoy the film.