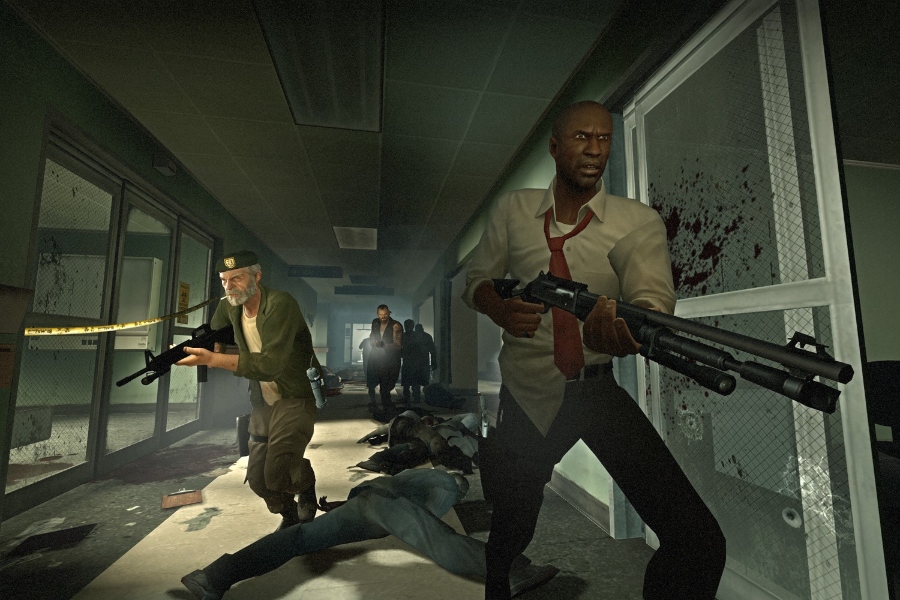 Left 4 Dead may not be a mental challenge, but it's a a pretty fun zombie game.

Left for Dead is one game that I have played through multiple times. Believe you me that is not something that can be said for many video games. It is the first infection shooter game that I ever played and will always hold a special place in my heart. Now I say infection shooter because the game never says zombie, it always uses infected. This being said it’s a zombie shooter and nothing more.

The story is pretty generic, run and survive. There are six campaigns each with two to five chapters full of zombie fighting action. In each chapter the player is trying to escape the city. Something always goes wrong, whether it be running out of gas or the helicopter pilot being infected. Between each of these incidents the characters run from safe house to safe house trying to get to a new location. Despite mostly lacking story by the end of the game you will find yourself attached to the characters and their rhetoric thanks to cut scenes and in game remarks. The characters consist of a biker, Francis, an office worker, Louis, an ex-special forces soldier, Bill, and a woman, Zoey. The Bill is kind of like the father of the group and is, in my humble opinion, the coolest of the group. This makes the ending all the more heartbreaking. The big finale sees that the soldier dies so that the rest may escape. This is fleshed out in the second installment of the series in which the remaining group makes a cameo at the end.

The graphics are decent, at least for the time. Compared to the games coming out today the graphics of this 2008 hit are trash, but back then they were nothing to sneeze at. The game is a little low resolution, but that will all be forgotten once you start playing the game. As soon as you start you will see that the graphics more than meet their purpose.

Now let’s get why people actually play the game. The gameplay is excellent. Left 4 Dead does not mess around with sneaking or conserving resources. You can usually find enough ammo, unless you go too hog wild. You can also refill at every safe house. Do you know what that means? It means you can mow down hordes of infected. Oh, yeah. The thing that makes this game so great is that it lets you take your anger out on hundreds of infected. You don’t need to sneak, unless you are trying to get past a witch. The infected consist of your standard runner, witches, which are super powerful, tanks, which are super powerful, hunters, smokers, and boomers, which are interesting. Boomers spit at you and attract hordes and if it is killed too close to you and is shot it blows up and attracts hordes while also blinding you. There are also certain places where you are forced to fight hordes and they also come along randomly if you are taking too long. Like I said the gameplay is basically mowing down tons of infected thoughtlessly. You really don’t have to think in this game for it really is just a kind of mindless game. It is due this however that you have to avoid going too crazy and using up all your ammo, because, although you have a pistol with unlimited ammo, you will not be able to survive any significant resistance.

Left 4 Dead is a fun video game. The story is good and the graphics are suitable, yes, but the gameplay is superb. If you are looking for a shoot em up game that requires almost no thinking Left 4 Dead is definitely the way to go. It may not be thought provoking, but it is fun as all get out. If you have the time I would recommend this game to you.