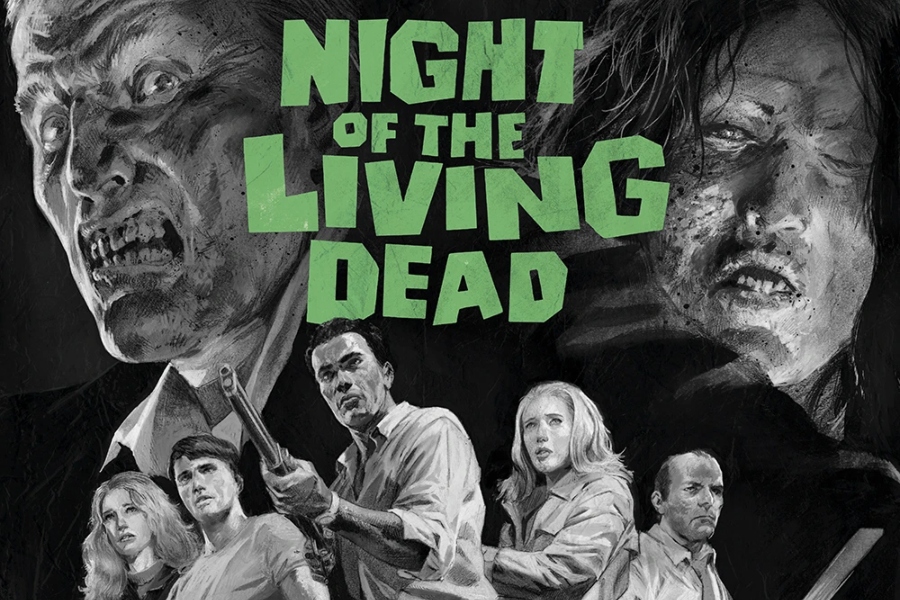 Night of the Living Dead is a classic horror movie that brought the zombie genre to the US.

Night of the Living Dead is the movie that first brought zombies to mainstream America. It is therefore of great importance in cinematic history. I would say that this movie has an all star cast, but it does not. I do not think anyone thought that this film would blow up the way it did. Zombie movies had not been popular in the past, but in making this masterpiece the future would forever be shaped. This is all thanks to the writer and director George A. Romero. It is safe to say that without Romero zombies would not have entered popular culture in the US. Now just think of America without zombies, that would just be crazy. He and his movie shaped mainstream culture in countless and unimaginable ways.

The movie opens with a brother and sister visiting the grave of their long deceased father. The brother is being a real jerk about it, but that will not last long. This is the place where we get the iconic line from Night of the Living Dead, “They’re coming to get you Barbara.” This might have been said by the brother to mock Barbara, but he is ultimately the first to die in the movie. Barbara must run for her life from the shambling menace. She escapes to a farmhouse where the rest of this film is set to take place. She must call for help, but the phone lines are down and more zombies are surrounding the house. What is she to do? The very first section perfectly represents what this movie does well, suspense. It is the suspense and not knowing what is going on that gets the viewer. This was a new kind of film and the idea of zombies was new so people did not know what to expect.

She runs out of the house after finding a dead body and is saved by a man who needs gas for his truck. Although he seems capable, Barbara is losing it. Meanwhile the newcomer is smashing in the heads of the creatures, but more and more are coming. As the man lights ablaze one of the dead it is realized that the creatures hate fire. Barbara falls virtually catatonic as the man, who will later be identified as Ben, tries to board up the doors and windows. While Barbara is silent she does offer a little help to her would be protector. After a while she falls out of her silence to yell about her brother and then faints. We are also introduced to one of the most brilliant aspects of this movie, the radio discussing what is happening. What is going on according to the news continues to change exemplifying that no one knows what is actually going on.

As Barbara awakes a small door into the basement is discovered and a gun inside a closet is found. Despite being awake Barbara is completely unresponsive. The radio now says that the murderers are eating their victims. It is at this point that people rush up from the basement. They conflict with Ben. The discussion over where to survive, the cellar or the house, begins. Whilst the discussion goes on the monsters try to breach the door and it is found that a shot to the chest makes no difference, but a head shot does. The viewer also gets to know that one of the cellar dwelling men is named Harry. More zombies surround the house as the internal conflict continues. Tom and Judy, also from the cellar, decide to stay upstairs as Harry, his wife, Helen, and his daughter, Karen, stay in the basement. Helen does not agree with his husband, but Harry is stubborn and wants to be right. The tensions are building and suspense continues. There is no way out of the situation and Harry’s hot blood does not make things easy.

Judy goes downstairs to tend to the sickly child. The group then sets up a television to hear the news. At long last the government finds out that the dead are returning to life to eat the living. Now is the time for the government to take action. They send out the national guard and set up rescue stations. It is then theorized that radiation from a probe that was destroyed started the zombie outbreak, yet more drawing out how no one really knows what is happening. A leading expert now says that all dead bodies must be burned immediately to avoid reanimation. Still information is scarce, but at least some things are being learned. Major movements on the part of the government are now underway.

The group discusses how to go out and get gas for the truck. They decide to use Molotov cocktails to scare the zombies and get the truck running. There are doubts though. The plan goes up in flames, along with the truck. Both Tom and Judy are killed and Harry almost let’s Ben die outside, but doesn’t. This is the first time we see the creatures actually devouring human flesh. The group is stuck and Barbara starts to speak in barely understandable phrases. Radiation is continued to be touted as the reason for the plague and groups are now being sent out to hunt the zombies. People have finally figured out how to kill the creatures, by destroying the head. Things are looking up, but then the power goes out. The infighting continues. This infighting would be the death of the most of the remaining group. Night of the Living Dead does a good job of building up the important scenes. It keeps you wanting to know what will happen next. This suspense in it of itself makes the movie worth watching.

The creatures then start using blunt instruments to break the windows and barricades. As Ben drops the gun Harry makes his move. They fight and Ben kills the ingrate. Harry falls into the cellar only to discover his daughter is one of the zombies. The barricades are broken down and Helen runs to her daughter and is killed. The door is broken down and Barbara is taken. Ben escapes to the cellar and kills the newly infected down there. Ben is the last surviving member of the group. Eventually the horde disperses and Ben is left to meet with the rescuers. He looks out the window into the morning as the monsters are being cleared out, when in a shocking turn of events he is shot as he was mistaken for a zombie. That is the end. Not one of the main characters survives, but humanity does, for now. The ending is completely unexpected. I certainly did not foresee the writer killing off the only remaining survivor in such a sudden and unzombie related manner.

Night of the Living dead would spawn a number of sequels and remakes. This being said nothing beats the original. The iconic movie that created a genre. We as Americans would not see another zombie movie as innovative until 28 Days Later. There is a reason that Romero zombie is still a common descriptor, meaning walking zombies. It is rare that a movie affects popular culture in such a huge way, but this movie did. It is definitely one of the best zombie movies of all time.