Zombies!!! (The board game) 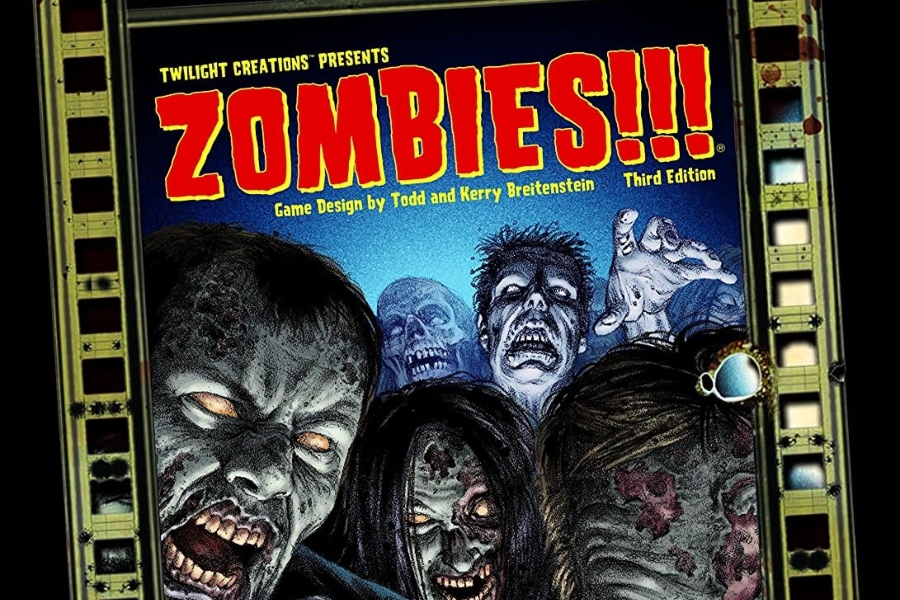 Zombies!!! is a sprawling board game that can quite hilarious.

Zombies!!! is an interesting and fun board game that constantly makes fun of itself. The game is constantly changing and no game is ever the same as another. I have also played using Zombies!!! 2: Zombie Corps(e) and Zombies!!! 3: Mall Walkers. The first adds a secret military base to the game, because every small town needs a secret military base. It also adds super zombies. The mall walker expansion adds a giant mall that is way too big for the town. Both come with new heliports. They add a lot to the Zombies!!! and make it much better. The game is definitely worth playing, especially with the expansions of which there are seventeen.

Zombies!!! starts with the players in the center of town. Each turn you pick a tile and place it on the board. When you pick the entrance to either the mall or military base you can then pick from those stacks rather than the town stack. You choose where to place the tiles and make the town your own. Each game evolves in its own unique way. This makes the game interesting. There are times, as in the game I just played, that the town becomes blocked off. Sometimes it happens so early on that no one can actually gain one of the victory conditions. Who knows what will happen? There are roads and unique buildings that have lives and bullets. It is sometimes hilarious what is in certain stores. For example in the mall the lingerie shop contains three bullets and no health. The toy store also has bullets. The military base has surprisingly few bullets in contrast. When a heliport is pulled the person with the lowest number of zombie kills places it. This is very important as whoever clears the helipad first wins. However whoever gets twenty five zombie kills first wins. So this rule is kind of an interesting choice to make. Just another thing that makes

Zombies!!! is such an interesting game. The combat system is your basic board game system. When on the same tile as a zombie the player rolls the die and getting anything four or higher gets a victory. You can use bullets to add to the number. If you lose the player loses one health. There is no retreat. You must fight it out till either you or the zombie is defeated. Super zombies require more fire power to deal with. They must be hit with a five or six. The player may also use cards to augment combat and gain an advantage. There is also the option to, because this is only one player can survive, sabotage other player’s combat by making the zombies stronger or the player weaker. You must always destroy the other players. At the start of the game you get three cards. Every turn you pick cards to get you back up to three cards in your hand. These cards can be used to hurt opponents, stop zombies, increase your damage and/or movement, or augment rules. There are weapons that consistently give you increased numbers, however many of these need you to go to a specific building in order to obtain the item. There are also cards that force the player to discard the weapon cards or better yet steal the weapons from your enemies. Other cards can be used once. Such examples as making it impossible for players to move, or zombies to move, or making it possible to move freely through zombies are common. These cards can be extremely useful. For example when racing to loot a building you can freeze your opponents, and they might freeze you. There are times when everyone freezes each other and nothing happens that round. This all being said the best part of the cards is that they are funny. The cards make jokes, have silly names, and absolutely hilarious pictures.

Zombies!!! is a great game with great expansions. The game has excellent playability and is entirely unique every time. I believe you and your friend will enjoy the game, although I must warn you some games can get lengthy. It is due to the map building system that games can last half an hour if the map gets closed off, or numerous hours if the map gets big. This being said it is entirely worth the time. If you like board games then this is an excellent buy.